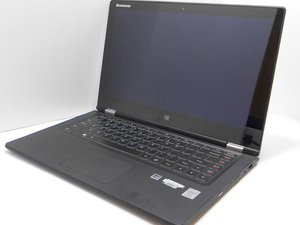 Ability to convert from laptop to tablet, tent or stand mode with hinges on the side. Released January 2014.

How to replace the whole keyboard?

I wanted to replace the whole keyboard, because about seven keys don't work. So in foresight that could last longer than changing single keys (like in the existing ifixit guide).

the black spots aren't screws, they are rivets or I don't know how this is called correctly. So one chance might be: cut them all off.

Is the single key fix from ifix it always successful?

I almost forgot to tell the end of the story: Unfortunately I wasn't able to repair the keys itself. I'd really enjoyed that. So I ended up buying a new keyboard+frame for 45€ here: https://www.medion.com/lenovoserviceshop... Everything fine :)

I'm glad they've got a service shop for everybody accessible.

the hitch of my yoga 2 tablet keyboard is broken. can i get a new keyboard ?

The keyboard is part of the upper case.

Here is the link to the service manual.[https://download.lenovo.com/consumer/mob.... If you scroll to p.60 you will see the part is #2. On p61 are ALL the part numbers for the upper case. It is country specific so you will have to get the part applicable to your particular laptop/country. If in doubt it should be printed on the underside of the upper case somewhere, which means that you will have to dis-assemble it to find it. The manual also shows the necessary pre-requisites and then the procedure for removing the upper case.

Once you have worked out the correct part number, type the part number ONLY into the search box of your browser and you will get results for suppliers of the part. The price varies a lot so do some comparisons before you decide where to get it from.

The Hardware Maintenance Manual does not provide details about removing the keyboard. I viewed, Lenovo Yoga 2 Pro 13" Laptop How To Repair Guide - By 365. Starting at 4:21, it appears to be the point in which you've reached in your image. The video states there are 37 screws for the keyboard, but the placement of the rivets you indicate and the screws they highlight in the video seem to show two different keyboards.

Though they skip the removal of all 37 screws, they do remove a few and after the keyboard is removed, the backside of the bezel indicates the location of the mountpoints. On yours, your image indicates the rivets are on the edges rather than between the keys. Can you provide a close-up view of the side and top of these rivets.

The Hardware Maintenance Manual, shows a list of keyboards on pages 61 and 62, with the screws on page 66. I just want to see a specific view of how these are mounted in to explore if there is a better method of removing them. Before deciding to cut them, contact lenovo support with the details of the FRU for your specific keyboard to check if a replacement keyboard includes screws or rivets. Also if there is a part number on your keyboard, use that instead if it differs from the available parts in the Hardware Maintenance Manual.

Lastly, of the 7 keys that do not work are they in a specific row or column. I viewed Laptop Keyboard not working problem solution and it goes into a bit more technical detail about troubleshooting problems such as these.

It is a bit in-depth than just replacing the keyboard or specific keyboard keys and I searched for it as a result of the question you asked on the Lenovo Yoga 2 13" Keyboard Keys Replacement guide. Also have you swapped a working key with a non-working key?

The screws unfortunately seem to exist only on the Yoga 2 13 _Pro_.

At the moment I can't send a photo of the rivets, because I assembled it back together, to find out all the actual dead keys. I can do that later.

I watched the video you linked to, very well explained. I was already familiar with the row and column matrix of a keyboard or LED-displays, but how to indicate different keyboard-failures was new to me. I've marked the faulty keys in this picture (this picture is just for the layout, it isn't actually a photo of my keyboard)

As you can see it does indicate to a row, but there also seems to be some randomness.

I suspect it's the cable (I will have a closer look at it soon) or the electric contacts of the keys.

These contacts can be restored using a graphite-liquid, as shown here (German, but the pictures should bring up the idea). Even though this is for very old keyboards, it may also be possible with modern keyboards.

This is a picture of an opened key. Everything I could take apart yet was just the mechanic part. Under the gum I lifted up is the foil of the upper contact-layer, and unfortunately I don't see any chance to get under it. I tried pressing the key with a tool, no response. Swapping undamaged mechanic parts of a key can't change anything here.

Your welcome! Both for your reply and your the initial question. You've piqued my interest into keyboard disassembly and troubleshooting and I felt that a thorough reply was important for those who are can appreciate repairing small faulty parts and those that may not be aware of its intricacies.

There was an additional video that I viewed yesterday that discussed repairing the ribbon cable. I briefly viewed it because I thought the one that I mentioned was more relevant. It mentioned cutting about 1mm of keyboard ribbon cable. I'll try to find it to post here. I'm not sure if it will help with the randomness of the keys you highlighted.

I translated the link your provided into English and have it in my bookmarks for when I may need it in the future.