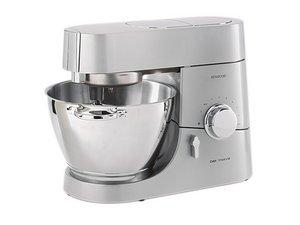 A stand mixer originally by Ken Wood in Britain, now owned by De'Longhi. 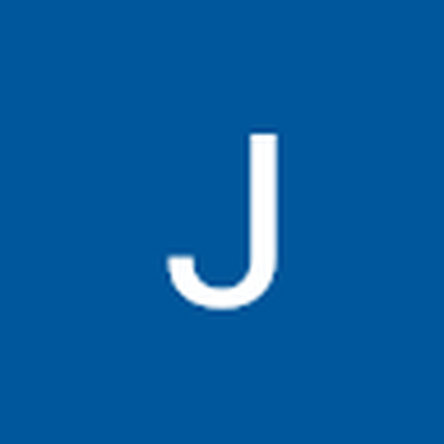 My Kenwood Chef (1991) does not rotate and unwinds the nut if the food mix is solid (even a pastry mix). I have had it serviced about 10 years ago because this was happening but it still didnt rotate. Its fine with liquids (little resistance) 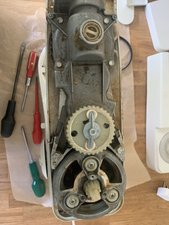 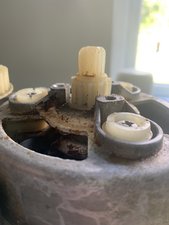 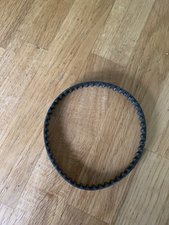 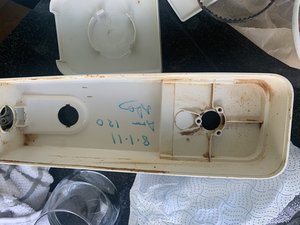 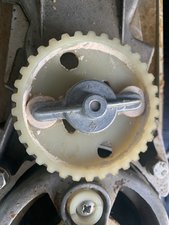 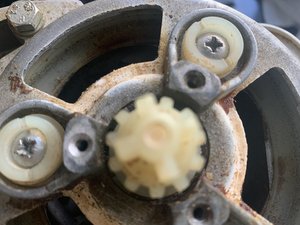 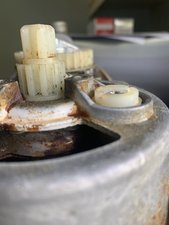 Janet Bradshaw it is possible that the plastic drive pinion gear is slipping. The plastic version of the gear splits frequently and it will run under no load but once some torque is required, like when it needs to mix stuff, it will slip. We will need to see the gears as well as the gear housing since there are some rivets that create a weak spot and can separate the case.

THis guide Disassembling Kenwood Chef A701A Gearbox and Orbital Mixer assembly (could be a different model than yours) shows you an approximation of what could be involved. 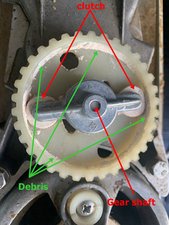 The metal part is actually what screws on the gear shaft for your planetary gearbox. If there would be some sort of mechanical issue in the gearbox and the motor would continue to try and drive the big plastic wheel, the increased resistance would cause the clutch wheels (red arrows) to rotate inside the plastic gear but would not drive the metal bar that connects the clutch wheels to the gear shaft. Looking at the "debris" it doesn't look like it does that. The debris would not be there. Run the mixer with the cover off and see if the metal moves when no load is applied. After that mix something heavy and see if it then stops the metal part from moving and the two clutch wheels move roll on the arm within the plastic gear. The metal arm should not be moving.

Found something. The A902 seems to have the same gearbox as your KM 201 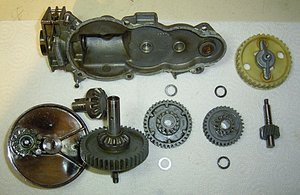 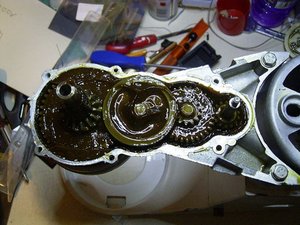 Janet Bradshaw just checked with what I have and even so there might be a slight difference in parts the main parts stayed the same. Still check your gears etc. If you are stuck with something just post a couple of pictures with your QUESTION so that we can see what you see.

My husband has stripped it down to this point today. He didn’t know how to lift up the large gear though

@Janet Bradshaw The gears themselves don't look very worn, but the "grip" on their shafts (which would cause them to slip) could be bad.

Could you also take a picture of the belt and post (the one under the gearbox in the picture)? Those drive belts can also wear out over time.

Edit: Oh, and also, if possible; Could you post a picture of the motor (even better if from a couple of angles, where the back of the motor is the one I have in mind).

@Janet Bradshaw there should be a gear in the bottom cover as well. Let's take a look at that too as well as a close up off the first gear in the first picture as well as. a closeuo of the larger gear. Something looks odd by that (what could be a clutch) Don‘t get frustrated with this repair and zs. Fixing things remotely is a PITA and seems to take forever but we really want to help you fixing this.

If you had it serviced about 10 years ago, what exactly was serviced?

These appliances have electric motors in them, and they used carbon brushes.
Those brushes are considered wear-parts, and needs to be replaced in intervals, depending on frequency of use.
Along with replacing the brushes, it's good practice to clean all contact points as the wearing of the brushes collect and needs to be cleaned to provide good contact.

One important symptom of bad / worn brushes, is the loss of power in the appliance, which is what you describe.

Will get husband to look at gears tomorrow. It sounds like the pinion gear oldturkey03 suggested.

@Janet Bradshaw It's a definite possibility, if the motor was replaced ~10 years ago, but not the gearbox, and it hasn't seen "corporate" use only recreational.

I have a Kenwood Chef from late 70s, and it's still running the original everything. It's no longer in use as I have bought the latest Chef, but if I wanted to use it, it would perform amicably. (It has seen only very infrequent use the last 15+ years.)