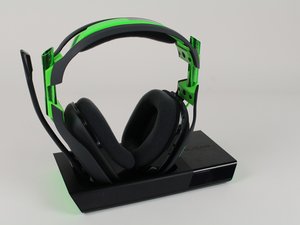 The Astro A50 2016, the third generation of its kind, was released in October, 2016. It is a wireless gaming headset that is compatible with PCs and XBox One/PS4, depending on the base station. 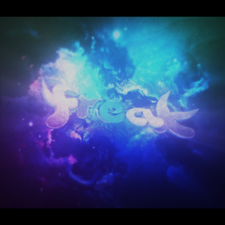 Some components on the USB daughter board or the motherboard would have been damaged by the excess voltage and would need to be replaced. Hopefully it may only be a fuse

There is no information online regarding the schematics for the headphone boards so the best that you could initially do is to open up the headphones to gain access to the boards (use link in above answer) to check what the damage is i.e. burnt out or blown components etc.

This is where it becomes difficult because if a component is burnt out and you can no longer make out what the markings were on the component itself it would be difficult to know what value component to replace it with.

Here’s an image that shows one particular component that may be a fuse but maybe not. I cannot make out what the designation for the component is on the board where it is located but if it has an F designation, it is a fuse. Use an Ohmmeter to check if it is OK i.e. it should measure 0.00 Ohms - a short circuit. 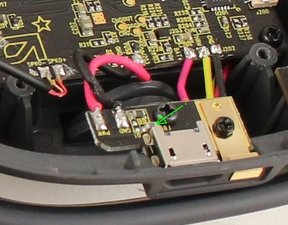 Here’s an image to show how to set up the meter and where to test.

Place the meter leads between the two green arrow points and check that there is a 0.00 reading on the meter.

If so then place the meter leads between the two red arrow points and check. If the meter shows OL or nothing at all, then check between the red arrow on the USB connector and the yellow arrow on what may be the fuse to make sure that it measures 0.00.

If that test OK then place the meter leads between the yellow arrow and the orange arrow to measure directly across the fuse itself. It should measure 0.00 Ohms if it is a fuse that is.

If it is a fuse it is easier to get a replacement fuse and unsolder the old and resolder the new than to try and find a replacement board, as you would need to know the “board number” and search for it, given that there aren’t any spares available for the headset or none that I can find anyway. You may have better luck

Thanks for helping. If it is the fuse that part would need to be chnaged? Where can I find it?

If it is the fuse what would be the next step?

Maybe use an Ohmmeter to check for continuity between pins 1 & 5 in the USB port and the red and black wires connected to the board. If not then the problem is on the board

Then you need to prove that the component is the problem by connecting the Ohmmeter across the component if it is a fuse and making sure that it measures 0.00 Ohms i.e. a short circuit and not OL i.e. an open circuit.

If it is a fuse and it is blown then the problem is getting the correct value replacement.

Check for any marking on the fuse that may help to identify it.

If none then at a guess since it is connected to a USB port the current should not be more than 2-3Amps.

You would also need to measure the dimensions of the fuse especially the length and width so that you can get the appropriate smd package size.

Here's a link that shows the sizes in smd components - scroll down to Passive rectangular components.

Again if it is the fuse that is the problem you will need to unsolder it and solder in the new one.

Thank you for explaining but I got readings on everything . I didn't get 0.00

It means short circuit which is what a fuse is supposed to measure.

You should have least have got this reading when measuring from the USB pins 1 & 5 to somewhere on the board as they must connect to something.

Here’s a link to the ifixit Astro A50 2016 Headset Motherboard Replacement guide.

In Step.4 of the guide the micro USB port is visible.

It appears that the board that it is on is held in by a screw, because in Step.5 it is no longer there and there has been no mention of it being removed.

Check if the port is still soldered onto the pcb.

I accidently plugged in my Astro a50s to the wrong thing maybe to much voltage but the headsets don't charge or turn on at all. What needs to be changed? 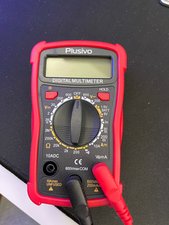 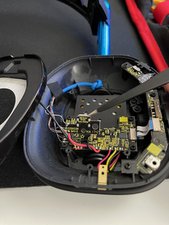 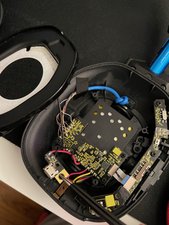 where do I set the multimeter to? So I can check the fuse? Also where can I find that usb port board for replace?