I replaced the battery on my Late 2012 Macbook Pro. When removing the left side external speaker connection, I inadvertently pulled the socket connector off the board. I was trying to pull the connector out of the holder, but pulled the "holder" off the board as well. Now the connector just dangles, there is nothing to hold it onto the board. The internal jack works fine for headset.

Is there a way to 'glue' or somehow re-attach this socket connector or would it require replacing the entire board?

The instructions had a similar connector on each speaker. They were shown as 2 pieces. One attached to the board, and the other attached to it. I was able to separate the ones on the right side easily. The left side, no matter hw hard I tried, would only reveal one piece. I pried underneath it. This is the result. So much for saving a hundred bucks by doing it myself. I can use earbuds, headphones etc. but certainly not convenient. 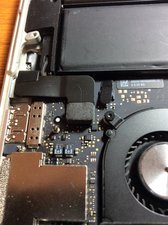 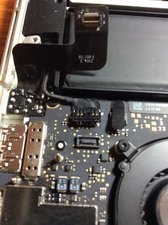 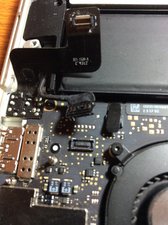 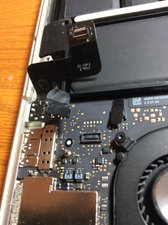 Can you take a good set of pics so we can see the damaged logic board and the connector (bottom).

You guys are sort of funny in discussing how you’d fix this broken part. Can you give me a hint as to where I can have it fixed? Not specifically of course, but what kind of store or service company could handle this? Electronic repair? Computer hardware repair? Apple repair? And how long should it take - an hour or a day? Any internet sites? Thanks again for getting me this far. I don’t care if you want to be negative

@dsandife - Don, We do respect each others skills, sometimes there is more than one way to do something. Healthy debate is good!

Happy you enjoyed our banter on the two techniques!

Soldering will need a steady hand and you need to be careful you don't bridge the pins. The gun needs less skill (hand wise) but you need to watch out on the temp and making sure you don't cook the other devices nearby hence the shielding. If you haven't soldered before then I would look for someone who has.

As to getting your logic board fixed a local electronics repair shop should be able to do this. Given how you only need this tacked back down I would hate to have you ship your system for such a trivial repair. Apple won't touch it, they will tell you you'll need a new logic board $$!

If push comes to shove, you'll need to get either a micro soldering iron or a small variable temp heat gun with a 1/2" or smaller nozzle, some solder flux, as well as solder wire (iron) or solder paste (gun). You'll want to protect the area around the connector with the foil and/or Kapton tape. Lastly don't forget to disconnect the battery!

- Soldering Station. This is a good soldering iron for small jobs.

- Heat Gun This nozzle is on the big side I would get some fittings to reduce the diameter.

- Portable Soldering Iron This is what I use as its very convenient, as well as offers both methods! It has soldering tips and offers a small nozzle to heat small areas. I'm sure you'll find it works for other projects as well.

Don Sandifer here : I ran into some medical issues and was away from my Macbook for a while. Even though this thread goes back to last year - the answer I'm looking for and the circumstances haven't changed. Bottom line - I have a socket that I pulled off the board accidentally. I'd like to get this fixed, and get my left external speaker working again. The speaker is fine - the socket needs to be re-attached to the board. Is there any place locally (Northern Virginia) that can repair this? Alternatively, where can I ship the MacBook to and get it repaired ? I have an ipad, so can get by without the MacBook for a bit if required. It appears that if I had a very small soldering iron and steady hands, I could do it myself. The steady hands are the big problem. Thanks.

Good news! The solder pads are intact! So you should be able to re-solder the connector back down. Don't loose the part!

You'll really want to locate someone with a rework station to re-attach it. This will require a hot air gun with a small tip.

It will take some effort so as not to damage the rest of the logic board so you really want to find someone who has the tools and skills to do it Vs your self.

@dsandife sorry but glue will not work. you will have to solder the connector back on so your speaker will function again. If you have broken traces from pulling the connector off you can use some thin wire to create a jumper for that.

@dsandife thank you for posting your images. That looks like a straight forward repair. You will need a good soldering iron and some sort of magnification source to repair. Pad are good and traces are intact. If you have never soldered on a board before I would suggest to just get it someone who has. Since everything is intact, cost will be minimal. Again, glue will not work!

I tried holding the loose piece against the board with a plastic tool. No sound. If there are multiple connections on each side, solder wouldn’t work. None of the pictures I’ve found give me enough details.

Any luck in a set of pics? That can help us help you

@dsandife no those pictures never do. that is why we like to ask you to post yours so we can help you. Use this guide Aggiungere immagini ad una domanda for that. It will allow us to see what you see. While you are at it, post your logicboard number. It will be in an 820-XXXX format (most likely a 820-3476)

@oldturkey03 - This is a surface mount design with very little contact exposed to use a soldering iron.

A small orifice hot air gun is what I would use and protect the areas around with foil or kapton tape.

@danj must have been a while since you soldered one of those. You use your hot air station on those and by the time you melt the solder you have a clump of plastic from your connector. I do recognize it is a SMD and solder one of those just very recently. Stay away from hot air rework on this.