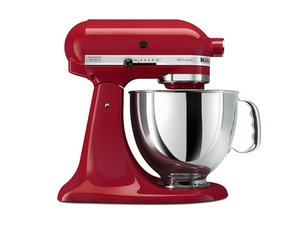 Repair and disassembly guides for Mixers.

Yo folks, anyone knows (certainly a universal problem) why handmixer does not start immediately, but takes several minutes until turns on, then works normally? Has 3 speeds, this only occurs on 1 speed. Other speeds work normal. Any components I need to replace?

This is a German vintage handmixer ABC-MIX (1960s) 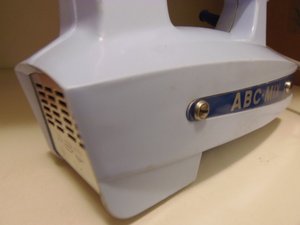 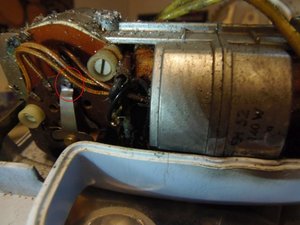 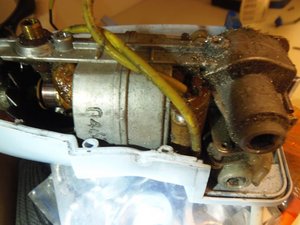 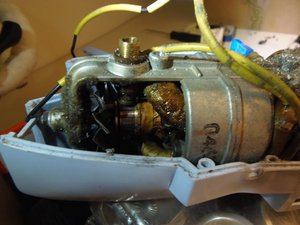 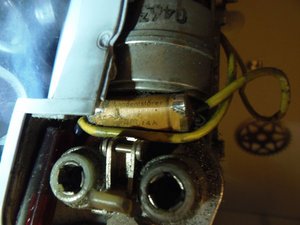 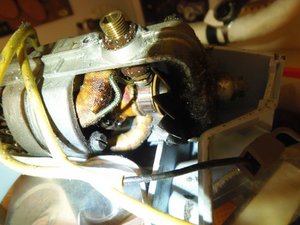 Thanks! Actually found out myself the trouble - just a connection crack, could fix it! Marked with a circle : )

Nice work, @henriko! Glad to hear you found the problem and it was something simple and repairable.

Here's some from RS Components-UK or Germany

If you're in a country other tham the US, the UK, or Germany, select your country from this list and copy and paste 201-1948 into the search bar, then select the search button.

Highly appreciated Andrew, absolutely brilliant know-how! Will spare all your info for future use. This mixer is surely one unique beast, actually German quality, unbreakable - it has survived from 1960s to this day with God knows how many working hours! They made them to last in those days - mostly inner construction all in metal - compared to modern cheap plastic plague crap.

@henriko, you mentioned that two of the three speeds work. Is the non-working speed the slowest one?

I'm thinking that capacitor has simply gotten so old that it's not working as well as it should. It's going to take more current to start up the motor at the slower speed, whereas at the higher speeds there's still enough current to turn the motor. The weakened capacitor can't store enough current to drive the motor in its high current demand, but still has enough to run them at lower currents.

I had a similar situation with my air conditioner. The fan wasn't running, but if I turned it on and manually started the blades it would spin up and run fine. Replacing the startup capacitor fixed the problem. If there's a way to do it without risking your fingers, can you try spinning the beater(s) manually and see if they start running on their own?

That is almost certainly a paper capacitor, commonly used in antique radios of that era. In those days, the paper worked fine as long as it wasn't exposed to moisture, which is why they were encased in wax.

A paper capacitor may look gooey or melted, yet test OK. Conversely, it may look perfect, but test bad on a capacitor checker. The leakage is internal, caused by water vapor that invisibly penetrates the wax or plastic coating over time, no matter what the exterior looks like. Melted wax is often the result of decades of normal operating temperatures inside the radio.

When repairing antique radios, the first thing that is almost always done is to replace all the paper capacitors, and I see no reason why your vintage mixer should be any different. That last digit on the label is almost certainly "/ 4 A", which really doesn't matter in finding a replacement. Basically you're looking for a 250 V / 0.1 uF capacitor of most any kind except electrolytic. Electrolytic caps are polarized; the have a plus and minus side, where the paper ones don't, so you don't want an electrolytic. Here's an example of a kind that the antique radio buffs prefer. 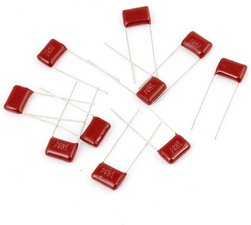 Hope this helps; let us know how it goes!

Actually, using a safety capacitor is important in this case, as the capacitor is connected to AC and doesn't pass through a transformer.

In this particular case I'm going to go with the tried and true adage of:

Given that the capacitor did not appear to be at fault, I'd be inclined to leave well enough alone. If it does eventually fail, it won't be catastrophic; more likely you'll see problems with starting it (again). I don't think there's a significant risk of danger even if it does fail.

Thanks Jerry for the big relief. Feels a little bit more relaxed now, sure, one would think and expect from the manufacturers that they know how the lifespan of that capacitor ends...Not giving any lady in the 60s a heart attack. Well I read this: "Capacitors should be silent. “Blown” capacitors my be silent, exhibits sounds of breakdown (humming, crackling), or — if they fail catastrophically — a very, very loud bang followed by deafening silence."

@andrewsawesome Very good point: do you think here is a significant risk of any danger involved if continuing use of this vintage mixer?

Your mixer is a really rare device! There is one in the "Deutsches Kunststoffmuseum".

Perhaps they can help you.

One piece is a "Breitbandentstörer", (broadband surpressor linefilter, often brandet ERO) containing capacitors. It is similar to this one: (use Google translate):

You're a genius. So much info : ) Yeah I've seen this mixer in one YT channel too called Miss Mixy check it out : ) it's simply an unbreakable wonder, German quality, vintage devices mostly metal parts compared to the naive modern all-plastic plague...

I read about capacitors: "Capacitors should be silent. “Blown” capacitors my be silent, exhibits sounds of breakdown (humming, crackling), or — if they fail catastrophically — a very, very loud bang followed by deafening silence." So I'm not sure, if I can feel safe continuing use of this mixer. Do you have any experience, can they break with time in such a horrific way?

How much wires are connected to the line filter? Two, four or six? Its main purpose is - yes - filtering voltage peeks, e.g. not to disturb nearby TVs or radios. I think, the device will run without it. I have an old mixer branded ESGE, also a heavy design from the 60s, and removed the filter without any issues.

The other capacitor helps to start the motor. In former times they were made from (oiled) paper, I often replace them in old Kenwood mixers. And yes, when they burst, you can hear a loud bang and smell it, but in most cases its not really dangerous. Replace it with a modern one X2-rated tyype. Good luck!

The AC cord goes through it (1 cord on each side) so it should be 2 in total (in and out). Are you sure it functions without it and no safety issues? Did you then just cut off the filter and then solder the cords into eachother? Which other capacitor are you talking about? I can only see this broadband surpressor linefilter which contains capacitors as VauWeh says. But your comment here is utmost important: I do not want to risk hearing that loud bang in the future no matter me or a lady using the mixer.

You are right though: I read about the paper capacitor here

Seems they are very unreliable - it's somehow though hard to believe as it has survived 60+ years now.