Basically today I was using my macbook pro and the screen suddenly started flickering green and pink horizontal lines and sometimes it shows a big vertical line when open or close the lid and also the vertical lines appear in different background, I take good care of my tech so i didn't hit or drop my macbook pro, I'm a full time student and my Macbook Pro warranty expired like 15 days ago, I don't have money to repair it and there is no Apple Store in the country that i am right now so I can’t get it diagnosed officially by Apple.

In this picture you will find some of the horizontal lines 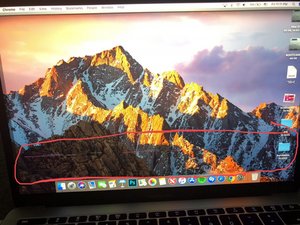 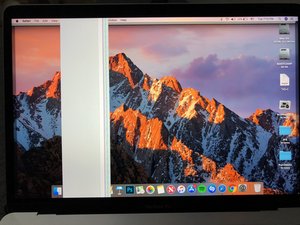 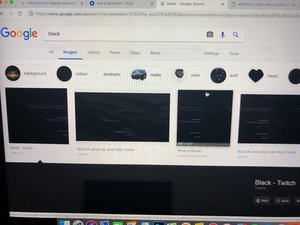 And in this video you are going to notice some random green and pink dots that flashes very fast in the same place of the big vertical stripe.

Note: I already reset PRAM and SMC, and started safe mode with no luck. I connected the macbook pro to an external display and it works great so GPU is good.

Please help me, thanks in advance.

UPDATE: So the stripe is not appearing anymore but the horizontal lines still appear in certain backgrounds it really depend on the colors that are being shown in the screen being black and white the ones that provoke the lines most. 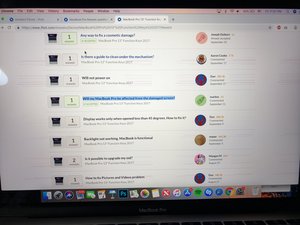 i have horizontal like after the lap top wes walm in the bottom, but it happens when its co0ld too first in therming, please on my morning coffe is screwed by this not onnly my work and presemntations!! need a replacememnt

Sounds like the ribbon cable from the LCD panel to the motherboard is bad, if you gently squeeze around the edges of the display does the problem get better or worse?

If your AppleCare only expired a very short time ago you might want to see if you can still get the repair. I would contact Apple even though you are not close to a store. Apple is pretty good about extending warranties on products with a higher than normal failure rate and have in the past extended warranties on laptops which all had common failures.

There is a thread on here already about MBPs ribbon cables failing… Screen issues, Back light dims & goes out

No, I does not get any better or worse, in fact I opened the bottom case and started squeezing the display cables and it did absolutely nothing.

The thing is that I never had AppleCare, the one year warranty just finished in September, I am not in USA right now and i will only be able to visit an Apple Store until the next year, in the country that I am right now there are no Apple Stores.

How would suggest I contact Apple, i already contacted Apple through chat and they said i have to go to an Apple authorized retailer which I did and they are charging me like $50 just to check what is the problem with the mac so I am a little screwed, Please help me

Thanks for replying so fast.

The link Kevin posted aimed you to had to do with the backlight having issues. In your case there is a different set of cables which carry the video signal. But I don’t think thats your issue ;-{

Here you have two different issues the first are the artifacts on the screen. This is caused by stale information still held in the VRAM buffer which corrupts the screen image with the horizontal lines and blurs. The second is the more troubling one as the vertical bar is a display failure! This often happens when the lid received a bang or crushed so the fragile connections to the LCD panel gets damaged. This is where the flexible cables are bonded to the glass LCD panel often called a TAB error. Basically, the bonding had broken free sometimes there is enough tension to hold the connection together so it will sometimes work and then not.

Here’s a deeper view of your screens connections between the display assembly and the T-CON board. It’s possible the video signal cables could be damaged as well. I haven’t seen the vertical bar condition in this series yet. Unlike the older models the T-CON board was within the lid its self here it’s been moved to the main case location. 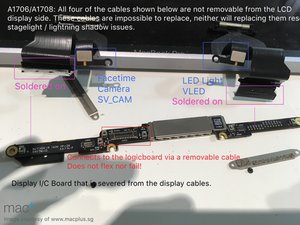 Now the bad news somehow you need to get your system to Apple ASAP as Apple might repair it under warranty as you’er so close to the cutoff point. You will likely need to do some groveling and if that fails push the issue up the food chain to get someone to cave-in. If that fails OUCH! As you are looking at least a new display assembly and maybe a new logic board as well each is about $700 USD.

Too bad this machine isn't great when it comes to self-repair and part availability. As @danj said, you want to avoid pressure on the lid or screen because too much pressure can cause... well, this.

Thank you for replying, so I spoke directly to apple with an international call and they told me they are going to fix it for free so I went to the apple authorized retailer and today they told me they have to replace the whole Display panel but they don’t have the display in the country so I have to wait for them to order it from USA and install to my Mac to see if it fixes the problem. I will be posting here what finally happens to my Mac.

So finally Apple decided to fix the display for free and now its working flawless, they replaced the whole screen panel and now it’s good again. Apple Support is perfect.

I have never gotten an Apple Macbook Pro that didn’t suffer a problem but also I’m never going to be a sole windows user since it’s easier to run other os’s in virtual. Sure things happen to things you buy and you should get them fixed as soon as you can send them in regardless if it’s free or for a price. Most cases Apple with replace it since I currently have a Macbook Pro 2017 that is suffering from similar issue (not as bad). Not sure why Apple hasn’t started their replacement plan for the 2017 model. Maybe it hasn’t gotten to critical mass yet. I do have an older macbook pro 2009 that suffered from glue failure and I didn’t find out about how apple was fixing it for a limited time until it was too late. 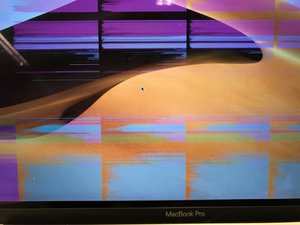 Horizontal lines are flickering and changing color. It started the next day when I opened the lid.

I wonder if this happens more often for this. kind of model ?

the 2016 to 2018 models have flexgate but apple doesn't want to create a replacement program since you have to replace the whole display panel to fix it.

So the message is, don't close the lid it can damage your display.

This in and unbelievable issue for Mac gear, very tempted to switch to Widows systems, this is ridiculous service behind your equipment Apple!.

Will like this repaired free of cost, I will pay for the shipping no problem… But please, my office is considering jumping to Windows systems.

I feel your pain! Sadly we are not Apple! You will need to talk to them directly and only to them! Review 13-inch MacBook Pro Display Backlight Service Program

Don't take No as the answer! You'll need to push your case up the food chain! Let us know here how you did.

Buddy, there is no way unless a short time happened after warranty expired, if happened more than 1 month later, you have to pay the money, I'm sorry but that's the way it is :(

"The program covers eligible MacBook Pro models for 4 years after the first retail sale of the unit."

All of the 13" models including the very first sold in 2016 are still covered!

I have a macbook pro 13” 2017. The keyboard is messed up and under an apple recall, but when that happened, the display also started to flicker and have colored bands. Took it to apple, and even though it is 1.5 years since I purchased (half a year over their warranty), they would not fix the display for free. The keyboard, as I said was covered.

Of course they said it was a “coincidence” that the two failed simultaneously. No drops or damage. !#^&@@ me off and the store manager wouldn’t budge. Fortunately, I put the purchase on a credit card that offered extended warranty for an extra year, and Visa will pay for it. But still, when this appears to be a problem that others have reported, you would think there would be some consideration on Apple’s part.

I actually have 6 apple computers (do art installations) and Apple’s response was I should have gotten Apple Care. I told them if I did that for the 6 computers I would have spent enough $ for Apple Care to buy another computer! Sometimes they can be so dense.

I had a 2017 13” MacBook Pro. The keyboard was messed up, replaced twice and started to mess up again. Also, I had horizontal lines that completely distorted the screen. I had to pay to have the screen replaced (about $300 from apple). About a month later when the keyboard started messing up again, and I was getting flickering, I discussed the issues with a customer support SUPERVISOR (don’t bother with the underlings). After much back and forth, he admitted that I had a lemon. I demanded a new MacBook Pro, and they agreed.

So it pays to ##&&% and moan. It’s not fun, but honesty and persistence pays off. There are a lot of problems reported about the 2017 models, and a number of recalls. So far, the new 2019 model is working beautifully. Good luck.

It happened AGAIN (since my last writing) and I insisted that they replace my computer becuase it was a lemon. In NY, there is a lemon law that covers all purchases. First I tried the store where I brought the computer for servicing, and then I climbed the ladder of supervisors until I got one who had the capability to offer a replacement. It wasn’t easy, and they will do everything in their power to counter you. They may even offer to fix it again for no charge (or reduce the charge). I really think that year of mbp, 2017, was a bad year and the machines have multiple recalls (keyboard, hard drive, and now screen). Insist on a new replacement. Good luck.

Sorry for that had happened to you multiple times and 2017 mbp is not a good product indeed. Unfortunately, there is only authorized retailers in my city and I believe they are unable to decide whether to refund or reimburse me. I have to go to the only Apple store in the country which is four hours away by driving to determine this is the deficiency of their product or I should have to pay for the repair. Wish me good luck and I will keep updating!

The exact same thing happened to me two days ago while I was just a moment away. This is the second time it has happened on my mbp pro 2017, the first time was 6 months ago and due to the warranty, they fixed it for me. I’d like to ask them to fix it without any cost, is this possible?