Theres a slot on the bottom of the console whats it for?

On the bottom of my SNES console there is a slot for something but i have no clue what. it has a protective cover and on the cover is simply the letters EXT. I am guessing its for some type of extension....However since i do not have the orginal manual that came with my Nes when i received it when i was little i cant be sure and have yet to find any way to find out what its for or what purpose it serves...

Nothing. It was originally put in by Nintendo with the anticipation that something would go there as an add on later that they could sell. In Japan the only thing was the Stellaview but that never came to America. They later added Extention ports to the N64, again only in Japan this is the 64DD short for Disk Drive and didn't leave Japan due to it being a commercial failure. Other EXTention ports can be found on the Gameboy, Virtual Boy, and Gamecube. All with the idea of system connectivity and post-release peripherals.

To reiterate, it doesn't do anything. Not in NTSC anyway.

I also thought it was for the bike add on.

At least that's where my buddy plugs his

Was originally planed to have a cd console attached like the Sega cd. They first worked with Philips (giving us 3 zelda games and a mario game on the Phillips cdi), than they worked with Sony. Sony broke away and gave birth to the Sony PlayStation.

Oh it was supposed to go on the bottom. I always pictured it on the top.

It is like Taylor Said ^ It was meant for a CD Expansion, or the Stellaview same reason most Nintendo Consoles have the same port except it was only really released in Japan and are extremely expensive. It was also meant for Nintendo Test Stations, since the disc drive nor Stellaview were released in the U.S. it's primary function became for the Nintendo Diagnostic/Test Stations.

They originally were working with Sony to produce a console that would utilize both cartridge and disc games, however when Nintendo decided to work with Phillips, for reasons that I will not go into detail for, they breached Sony's contract. Sony then later released the PlayStation with the slogan "PlayStation, It Only Does Everything!" it is also the same reason why some PlayStation commercials began with the commercials for Sega and Nintendo and led into theirs, that way they were able to show the consumer that they are better than Nintendo and SEGA.

Like said above, it was a partnership with SONY to make a CD-ROM add-on, but Nintendo saw what happened to the Mega CD (/Sega CD) and got cold feet. This gave birth to the competitor they STILL fight yearly - SONY Playstation!

(So it's a good thing it was never used really!)

There's art of the proposed "SNES CD" and also ONE Prototype found in the wild! I think Ben Heck showed it off? Just look up "Nintendo Playstation Prototype" or similar.

It can be used for hooking up to a computer for modification you have to put a cartridge in then click on the folder "cartridge/empty" (has to be an empty cartridge) and the adapter for the computer is only 18 dollars! 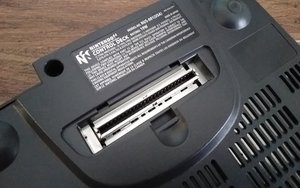 I do not have a Nintendo 64DD I wish I had one.

I have figured out what it is for it is for the Nintendo DD if you don't know what it is I'll show you a picture on the next one.