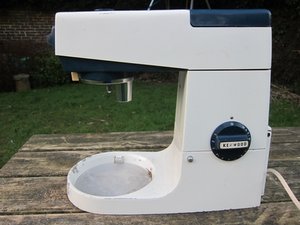 The Kenwood Chef A701A is a stand food mixer released by Kenwood.

Burning Smell but speed no problem

I just bought a 2nd hand Kenwood Chef A701A. It is working, the speed can be adjusted from one to max. However, there is burning smell but no smoke. How should I check on the motor and what to change?

My mom has one of this kenwood a701a for 24 years now. First hand and only. I remember, that all my life smell that "burning cable" or "charcoal" when she turned on the machine, no matter the speed, it always will have that smell. Today i plug the machine, to tested it after 8 years of no use, and that smell stills there. Remind me my childhood. Dont worry. Some of those a701a naturally smell like that. (sorry for my bad english) Cheers from Buenos Aires, Argentina!!!

I placed two cork made coasters below the machine for ventilation, the smell has finally gone when it is turning on. I think most likely the smell produced when the motor is turning hot! Please try it and feedback.

Brilliant! Thank you, your suggestion worked a treat

Nicolas Ayastuy, is this smell you speak of the same as you smell from the old toy race cars that went around a slotted track? The cars received their power from the metal strips on the track.

Yes, that kind of smell. But I was told old appliances will give this smell if you have not turned them on often. Thus, just put on two cork coaster under the machine, bear with it for the few uses, the smell will go away. The smell only return after I kept in store not using it for few months due to house moving.

It sounds to me like the rubber feet are missing from the base of the mixer - they're easily replaced and cheap on eBay. The gap is essential for cooling of the motor. Using cork placemats as a temporary fix is a great idea though.

The burning smell is unlikely to be the motor.

The most likely source of the burning smell is a failing capacitor of overheated resistor, but those two links will give you more details.

Repair is relatively simple, but you will need to replace some components, and the ability to solder is required. These machines, unlike their modern equivalents are designed to be relatively easy to service.

I would suspect that the capacitor (or capacitors, depending on model) for the motor is/are the fault.

These can start to increase in ESR as they age and degrade, and thus, since the Equivalent Series Resistance increases, they dissipate more heat.

Power varies with current squared x resistance, if you remember from your school Physics classes.

More heat means burning smell, and smoke eventually, even though the brushed motor appears to be functioning normally. If you look at the capacitors, they are often cracked, some time almost split in two as a result of the issue.

While you have the machine apart, I would also replace the parts listed in one of the many ebay sellers who specialise in this kind of thing. Look for "Kenwood Chef" "repair kit" and make sure you pick the correct kit for your mixer.

You might save a few pennies by identifying the exact component on your machine, but the other capacitors, resistors (and perhaps triac, depending on model), will probably fail eventually, so you might save yourself another tear down, by simply replacing the lot.

This last piece of advice applies to the 700 series, 900 series, KM300 series... in fact, most of the Chef and Master models. Also check the brushes are correctly seated.

If they are worn, or not seated correctly, they will spark, or make intermittent contact, which can cause the motor to pulse, and the sparking can kill the triac. The symptoms of this problem are a "gritty" sound from the motor as it runs, or pulsing high speed, low speed, high speed at random. If the triac fails open circuit, the mixer will be dead, if it fails short circuit, the mixer will run at high speed, regardless of the speed controller setting. If the triac is starting to fail, or overheating due to arcing, the mixer will typically start off acting normally, but get progressively worse, either faster, slower, or pulsing more and more randomly.

In fact, as with most brushed motor appliances, check the motor and brushes as a matter of course, you should see somewhere between 50 and 100 ohms across the brushes, depending on the motor wattage. Obviously only measure this with the power disconnected. Turning the motor slowly should pulse low ohms(actually back emf from the motor), 50 ohms, low ohms, 50 ohms etc. as each coil connects across the brushes.

DO NOT crank the motor quickly with your ohm meter attached, you will generate high voltage pulses which the multimeter will not appreciate.

... and clean off any carbon deposits from the commutator with a paint brush and some contact cleaner. If you leave these to build up long enough, they may cause the commutator to fail. In this case, probably with a small but expensive pop. In the case of my washing machine, it failed with a very impressive bang, which took out a 30A fuse. Needless to say, the motor was scrap.

Just for fun, here is my Chef A901, recently given to me completely wrecked (and in the original White), I refurbished the motor, and resprayed it. I think it looks pretty good. Should last another 30 years https://photos.google.com/photo/AF1QipM3...

@Andrew Hull Thank you! I will check.

The smell is the smell of ozone produced by the sparking brushes. Quite common around old brushed electric motors.

ozone in high concentration is injurious to health

If you have the Kenwood Chef A701 or A701a, here’s the service manual that may help.

It has complete service instructions, a parts list and a wiring diagram.

Hopefully this is of some help.

The burning smell is most likely coming from the main power resistor on the speed control circuit. It is a 450 ohm, 15 Watt, wirewound resistor which becomes quite hot in use - more so at low speed. A slight odour is not a fault.

Sparking from the motor brushes and/or speed control contacts can also result in a slight electrical smell. If the machine has been heavily used it could be worthwhile getting the motor cleaned and serviced to prolong life.

so: What do most of you suggest when you get the "electric toy car" smell? Capacitor or brushes? Didn't came out that clear and when I looked for the repair kit, it just showed me some basic stuff with one green capacitor for 25 quid (!?).

Basically I have no clue at all yet, but I'm not afraid to work into it. My Kenwood A701A still works great and in fact I got no real problem (speed, so on), except the smell - and when I mince for like an hour, the case gets a little hot. Before reading this, I thought it's "just" the plasticizers that want to get out after 30+ years. :D

Yes, that kind of electric toy car smell due to the overheated caused by wire off rubber stand & lack of ventilation at the bottom of the appliance. But I was told old appliances will give this smell if you have not turned them on often, the old motor need to work harder initially when you turn it on. I just elevated the appliance by placing two cork coasters side-by-side under the machine for better ventilation. Bear with it for few uses, the smell will go away. The smell only return after I kept in store not using it for few months due to house moving.