I changed the screen because it cracked. When I first tried the screen it was fine and it worked. Then after a while the backlight didn't work. The screen works and I can barely see things on the screen, but backlight is not working. 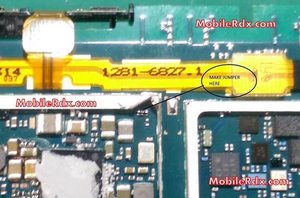 It's the first time the phone is opened and I never thouched the fuse because it's underneath a metallic plate, which I didn't even touch or moved. So why would I have to do something with the fuse if I never did anything to it and the screen was working when I tested it?? It just stopped working afterwards for some unknown reason.

The phone is on, because there is the blinking light. So, do you have some suggestions??? Should I actually try to add a jumper on the fuse??

EDIT: I remember that when I was about to close the phone I put the screen upside down, and it was when the screen backlight stopped working. Is this some reason why the fuse could have been damaged???

Hello all! I have same problem but trick with jumper not done result. I find problem in this chip J5cx http://prntscr.com/99khme but I can't find it for buying. I replace this chip from another xperia z2 and now its work.

Do you have more details with this replacement?

Where ist this chip located? Do you have other Fotos?

How do you remove and resolder it on place?

Hi, I had the same problem and took the risk of making the jumper. I used a conducting glue instead of soldering the thing because it is so tiny, I do not own the tools for it.

It worked fine using this glue, my screen is as bright as it should be!

O have the same problem. After I replace the screen of my phone. The brightness become so dim. I tested na light sensor but it is working.

Sony's TFT LCD IPS Fuse exploded on Logic Board. Just solder it out. Use a Good Solder + Microscope.

Hey Mel.. Did you fix it? I have the same problem

I got someone to fix it for me. I didn't do it because you need the tools and I didn't have them. But where the picture shows is where you need to solder. The guy that did it soldered a very thin metal cable in that spot. So yes, it should work. It's how I got mine fixed. But you definitely need tools for soldering such a small part. It's not easy. I tried it and couldn't do it. So I had someone do it for me.

Hi there. I've replaced the screen of my z3 compact. I think have connected the lcd screen properly, in fact it turns on, but the touch screen is not working. Can you help me to get why and fix it?﻿

Did u solve it? Ihave same problem

I hope this helps!

got a similar problem. The backlight of my Sony Xperia Z isn't working after I replaced the backcover only, I haven't touched anything but the backcover and two screws that fell out, as I opened the phone's back. Anyone think it's still the fuse or got any other idea?