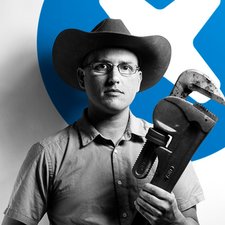 How do I diagnose a narcoleptic Mac?

My workhorse machine is a 2.5 GHz A1260 with 6GB RAM and an SSD swapped in for the optical drive. I love it, scratches and dings and all. I've lost track of how many times I've disassembled it, and it's missing a few screws.

For the last six months or so, the sturdy machine has had intermittent narcolepsy: it goes to sleep on its own, with no provocation, whether plugged into AC power or not. The behaviour started with a dying battery, but I'm running on a brand-new one now.

I haven't cared about the issue so much up to now— it only happened once a day or so, and the computer's brief naps gave me a good excuse to go stretch. But today, it's gone to sleep three times thus far and shut off with no warning twice. It's been plugged into an 85W AC adapter the whole time.

This issue may be similar to Random MacBook Pro shut down, but we never saw a resolution on that.

When it shut off on me today, it was plugged into power (glowing amber) and my battery was at about 80%. Started it back up, ran for about 5 minutes, then shut off again. Since then, it's been working fine. The computer hadn't been running much yet and wasn't warm, so it's not a heat issue.

Today, it started shutting off within 2 minutes of boot. I'm typing this on another machine. Taking it apart now; I'll start swapping components.

It's not the ambient light sensor or the sleep sensor (tested known-good parts on both). I swapped in a new upper case an hour ago, and it hasn't shut off since. I'm crossing my fingers, but not overly-optimistic yet.

Some things just can't be fixed! I hate to say it, but I was forced to give up on this machine and upgrade. We parted out the old machine, so it didn't end up in the dump, but I never did figure out what the problem was.

Sometimes, with the tremendous technical complexity of these machines, you have to put the problem down to something at the board-level. I'm pretty confident replacing the main board would have fixed it (I tried everything else that made sense), but at that point I was better off recycling the machine and upgrading. Thanks for all the help with the issue!

Please describe the "power issue" to a greater extent.

Go to Applications -> Utilities -> Console and see if you can find the message just before the shutdown.

Good idea! But nothing before the shutdown— it was a complete, sudden loss of power. Messages in console after boot: DirectoryService[11] Improper shutdown detected; kernel Previous Shutdown Cause: -81.

Good posts. I'm using the same machine and love it equally. Chances are that I some day will have the same problem. Please keep us updated! =)

This sounds similar to the "Narcoleptic Aluminum PowerBook Syndrome". Symptoms include the PowerBook suddenly entering sleep mode, no matter what the battery level is or if it is plugged in. One cause is the ambient light sensing, and associated instruction set coding, with possible keyboard backlight and sleep light issues accompanying the so-called "narcolepsy". Another cause is the trackpad heat sensor monitoring the trackpad; system logs report "Power Management received emergency overtemp signal. Going to sleep." To correct this, service groups will often replace the motherboard or power converter, but the actual fix (depending on the model) for the first cause is to replace or remove the left or right ambient light sensors; and for the second cause, disconnect, remove, or replace the heat sensor, or the entire top case which holds the trackpad heat sensor. Alternatively, there are reports which detail success in removing certain sensor kernel extensions or rebuilding the kernel using the Darwin Open Source project after commenting out the relevant sleepSystem() call; though permanent solution of the sleep issue in this manner is little documented.

Sounds good to me. + Ralph

I can believe the light sensor for it going to sleep, but I wouldn't think that would cause the power issue. Of course, they could be completely independent issues.

The powering down may be the trackpad heat sensor. Since you have access to the parts, I would replace both sensors.

It kills me how intermittent this is. Been using the computer all day, and it has only gone to sleep once more. No shutoffs. I probably have to wait until this weekend before I'll have time to take it apart and swap components.

Funky .plist files can cause all sorts of goblins. Of course you have already set "Computer sleep=Never", "Display Sleep=Never", unchecked "Put the hard disk to sleep when possible", "Slightly dim the display when using this power source". (battery) and unchecked "Automatically reduce brightness before display sleep".

If this answer is acceptable please return and mark it.

Nice thought, but it's not a software problem— the machine is shutting off before the OS even boots.

Incidentally, have you checked that the spotlight search on the SSD may be so "fast" that the processor actually overheats? I have had that issue with an SSD installed into an A1260/Macbook Pro/Core 2 Duo. Overheating can cause shutdowns.

ncidentally, have you checked if the spotlight search on the SSD could be so "fast" due to rapid data transactions with the SSD that the main logic board actually overheats? I have had that issue with an SSD installed into an A1260/Macbook Pro/Core 2 Duo. Overheating can cause shutdowns.

P.S. you can download temperature monitor programs for your Apple on the internet for free.

Yeah, I kept an eye on the temperature—but it shut off even 5 seconds after boot sometimes, way too soon for it to be temperature related.

Wow, it looks like there are some pretty knowledgeable replies to your issue here. All of the commonly associated issues have been addressed. That's great, that's why you should look here first.

One thing that you may not have tried, although you have had this poor thing in pieces more than together, and have likely either resolved or trashed the machine in the 2 years past. I had a similar issue with an iBook that I still have around here somewhere. Performed all of the recommended and some "don't try this at home" things too.

The solution, was neither obvious nor logical. Often Mac laptops, although super, have some issues with very tight space. One step that I took during my diagnosis and general parts swapping was to replace the bundle cable to the inverter, not the power side, the data side. In doing so I found the bundle to be in an awkward spot by the left hinge and slightly pinched. I replaced this wire bundle and found that the issue went away for some time.

Inevitably to start acting up again in a few months. My solution was to take a small piece of shrink tubing, heated it to slightly bind the wire bundle. Just long enough to get it through the hinge area. Then re-installed the cable in a slightly different location (I believe, just the other side of the hinge), and pushed a little further into the body end of the cable allowing for a bit more tension in the display end... wha-la! No more blinky display or odd shut-downs. It has been almost 1 year and sill going strong, with my niece at the helm (of course).

Since then, when I have seen this type of behavior I will immediately examine the wire bundle on the data side. Since pinching these very thin wires will change continuity of the wire itself, and while not causing the device to fail may cause some very odd behavior. Similar to issues such as "micro-fracture" of the etched surface of the board or "Popped Capacitors", it is much more simple to address and much less costly.

Hope you had good luck with that one, Cheers!

I've had the same problem with my macbook pro core 2 duo (2.6 ghz I think). I've now brought it in to the Genius bar FIVE times. So not happy about it. They have no idea why its doing it, and they just keep replacing stuff and giving it back to me and saying its fixed. But wont give me a new computer. They've replaced the batttery, logic board, heat pipe(?), and some of the power management components, and reinstalled the os twice.

error code -81. They say its not in the book, and they dont know what it is. Anyone have any tips for the geniuses?

Ambient light sensor? Hmmm. Maybe I'll suggest that to them since they're still working on it at teh shop. thx

Resetting the logic board and testing and replacing the PRAM battery would have been my first step. Then I would have made sure the firmware was updated and properly updated and rebooted on restart. I am a certified Apple tech and found out a lot of people don't know about other good troubleshooting steps involved for proper diagnostic fixes. Yanking and resetting the RAM along with zapping the PRAM is so a great way to resolve some issues. When it come to problems with the logic board more in depth troubleshooting steps are taken. Best of luck with your next Mac.

Hi I am not sure if this helps but if you are still encountering the same issue can you try to see if the DVD drive still works correctly after the shutdown? I.e. read a disc.

I have just replaced my old late 2008 Uni-body MacBook Pro because it would randomly put itself to sleep. The fans would be running on full power and the CPU temp would be through the roof ( I was monitoring it with Istat Menu meters) also it was plugged and charged so that was not the issue.

I could tell when it was going to go to sleep as the connected external discs would sleep first and then the machine would freeze and then go into a forced sleep.

Tried numerous SMC fan resets and also a PRAM reset, which should only be done in the most extreme issues as it is apparently quite dangerous or risky.

Turned out there was a fault in the Logic board and that it was not maintaining temperature control and thus the MacBook Pro was getting too hot and shutting down to protect itself, but not before taking out the DVD drive!!

Which echos the comments made above that it was a Logic board issue.

My long experience with several random sleep or random shutdown laptops is that this was invariably a logic board problem, Apple used to take care of it .... and although this was some years ago—the first aluminum 15" Powerbooks—I think the issue is the same. Not a self-fixit.

In fact, early on, Apple replaced two machines for free.

This used to be common knowledge. I'm not sure the "Geniuses" have any—but if a logic board replacement doesn't fix the problem, the machine should be replaced. There's nothing you could have done to have caused a problem at that level.