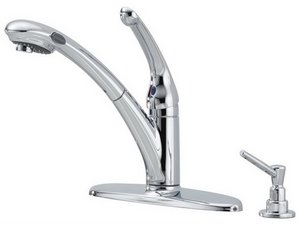 Repair guides and support for sinks, taps and faucets in your kitchen or bathroom.

Can't get faucet cover off

This is to fix leak via repair kit. Need to get into faucet to install kit parts. No luck getting cover off. I know there is a similar question with an answer but have have tried a strap wrench. Where I am at:

Any thoughts on usefulness on trying from below? Or other thoughts? 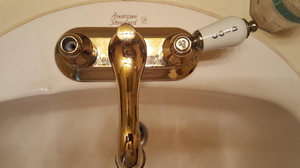 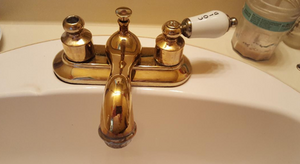 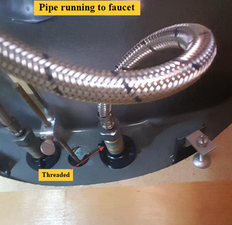 Sorry for long absence on this. I found the manual and it is, indeed, just supposed to "lift off" after the single screw at the top is removed. There is no set screw on side. Why it does not just "lift off" I have yet to figure out. I may just remove the whole faucet to have a look from a different angle or take as an opportunity/excuse to replace. It is dated in its look and doesn't match rest of the room anyway.

Is there something stamped on the base of the unit on the right side under the cold tap as shown in your 1st image or is it just some water marks etc?

@jayeff No, nothing at the base of the cold tap. You are probably seeing reflections, the unit is pretty shiny and the light is right overhead.

Your suggestion of removing the retaining nut is what I was considering as next step. Thanks for letting me know it doesn't sound like a crazy, pointless idea. And speed of answer much appreciated.

You need to unscrew the 3 elements in red circles. The 2 black plastic retainers, the middle metal nut, which also restrains it, and the water hoses can be removed once the faucet is able to move upward. Remember to cut the water before it reaches the faucet! Happy plumbing! 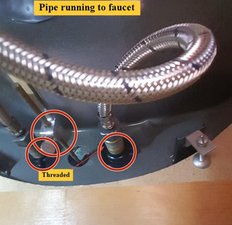 Remove the water hoses before pulling it up, I just realized that it's not possible the way I mentioned before. The black retainers will not pass through the hose nuts. Sorry about that.

@g3548dm I don't think you get to the packing and valve stem from the bottom. When you move the handle does the part that covers the stem move as well? I would suggest to pry it up instead of turning it. Double check to make sure there is no setscrew on the side somewhere.

If "by moving the handle" you mean turning water on/off, yes, the cover moves. But it does not move beyond what is needed to turn water on/off. I tried a a flat screwdriver and purchased a Faucet Handle & Sleeve Puller with idea is was just "gunked on there", but that didn't do trick either so I don't think pulling it up is the fix (unfortunately).

I ran into the same sort of situation when trying to fix a faucet at the house my son bought. The final answer I found was that the faucet was old and so much corrosion had accumulated on the lever that it effectively welded the two parts together that were supposed to just slide apart. I ended up basically destroying the handle trying to get it off.

It sounds like that 's where you are; the only thing that's going to get those handles off is overwhelming force, which is almost certainly going to damage the finish on either the faucet or the handle. If it was me, I'd be planning on a replacement now.

You could try to take the faucet out of the sink, turn it upside down, fill the space at the bottom of the handle with penetrating oil (something like PB Blaster maybe) and let it soak; that might dissolve enough of the corrosion to let the parts separate.

If you are trying to replace a washer, first open the faucet, then remove the handle, then continue turning the inside till it screws out.

If it does not screw out, it is probably corroded stuck.