I recently removed my iMac late 2015 i5 27” screen to upgrade the hard drive. (Something I’ve done successfully before). Upon re-assembly, the machine would not boot. Got a chime but then a full black screen.

I removed the screen again, checked all of the connections, and they seem good. I get LED #1+#2 lit up on the diagnostic, but no #3. I’ve read that this means the the video card and logic board are not communicating.

I’ve tried resetting the PRAM and the SMC with no luck.

Thanks for any help.

I took the entire iMac apart to replace the PRAM battery. This did not help, but it was a ton of work.

Still getting only LED#1 and LED #2 lit up with a chime and a black screen.

I DID plug into an external display that that WORKS. I put some fan monitoring software and got the following showing no fan sensor for the LCD Flying Lead.

I assume this is the thermal sensor monitor on the display. Either it’s damages or disconnected.

Does anyone know if THIS is the sensor? 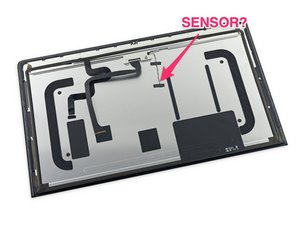 AND does it seem like this might be a solution to getting this machine up and running again. I don’t want to quit on it!

I’m throwing out one last request for help with this machine. (Late 2015 iMac)

I have scoured the forums here and elsewhere and have tried every single thing I’ve found short of replacing the logic board. Are there any other ideas before I have to strip this iMac down and sell it for parts?

Summary of the problem:

Anybody here have any further ideas for a fix?

Thank so much in advance.

Great question and self-searching diagnostics. If you haven't considered it already, try disconnecting the reconnecting the video card as you may have damaged (or disconnected) some cables even slightly with a misalignment. (it happens to all of us).

Thank you for the suggestion. In researching the disassembly of the iMac, I can't quite see where I would do this re-connection of the video card. It seems that all of the GPU components are soldered onto the logicboard. (see step 8 here)

Do you have any further insights about how I would acomplish this disconnect/reconnect of the Video card?

@ericsoup So a quick search on this topic revealed this has been answered before. I recommend you do a search in the future to help you solve your issue faster. Hope it helps as it’s from a great source @danj

@dunc Thank you for the link. I had read through that already and had not found an answer to my question about whether replacing the PRAM battery might fix my problem. This section was of much interest to me:

If the third LED is not visible after the system is turned on:

Verify whether the boot chime is present and fans are running when turned on (reset the SMC and PRAM and verify backup battery voltage for proper startup).

f the POST boot chime is not heard, go to the No Startup symptom flow.

If the POST boot chime is heard, go to the No Video symptom flow.

@ericsoup - FYI it was @dunc who aimed you to the link

Oops. Sorry about that.

@ericsoup Great work on finding out what the issue seems to be. If I'm correct, you can run macOS diagnostics from within macOS to confirm what the issue might be. The only thing it can't do is perform memory tests.

https://github.com/upekkha/AppleHardware... find your mac and try it. This should give you better results of what the issue might be and then you can come back here and confirm (if needed)

Thanks. I'm going to try it out this weekend.

@ericsoup - Have you looked at is the eDP connector on the logic board and the eDP cable as you could have stressed them. And then you could have damaged the display its self in the process of taking it off not using the correct tools (a common issue for first timers)

@danj - I have visually inspected the connector and cannot see any issues with it (bent pints, looseness of the connector, etc). I don't know how else to diagnose whether this being the issue without replacing it, and I'm afraid that level of soldering is beyond my capabilities. Do you know of any other type of diagnostic that can determine if this is the issue?

Thanks so much for your input. I really want to try to bring this machine back to life.

@ericsoup You'll need to find someone who has the needed tools and skills to replace the eDP connector as it often gets damaged when the cable is yanked. I still would try replacing the cable and hopefully the display its self is not damaged.

@danj - Thank you for the advise. I will try to hunt down someone savvy enough to do the repair. I did swap out the cable itself with a new one and it did not solve the problem, so I feel like you may be right that it's the connector.

did you ever get this Fix?