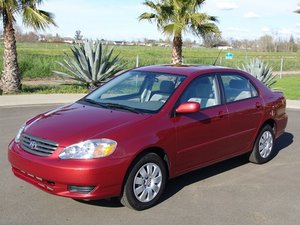 In August 2000, the ninth-generation Corolla was introduced in Japan, with edgier styling and more technology to bring the nameplate into the 21st century.

Help!! The heater in my 2005 Toyota Corolla is blowing cold air, what could cause this and how do I fix it. It’s winter and we need heat.

There can be a few issues here. You could have a bad/clogged heater core or an air bubble, you’re low on coolant, or the flap that switches airflow between the heater core and AC evaporator. ABOVE ALL MAKE SURE YOU HAVE THE CAR SET TO HEAT AND NOT COOL.

Make sure you’re good on coolant. There should be an expansion tank under the hood and on some vehicles it will have a mark for max and one for minimum. As long as it’s in between those marks whether the car is cooled off or running you should be fine. If it’s empty then you have a coolant leak somewhere that should be addressed but in the meantime, you can add coolant. Alternatively you could add regular tap water but you may run the risk of it freezing and causing a lot of damage if you add a lot. Just make sure you’re adding the right coolant. Certain cars require certain coolants. You can use a laser temperature gun to check the temperatures of the coolant lines that go to and from the heater core. The heater core is typically located inside the cabin or in the engine bay. You should be able to google where the core is located on your exact vehicle. If there’s a dramatic difference in temperature between the two, there’s an issue related to the heater core. If they’re the same or close in temperature then it’s an issue with the flap inside the dash.

This video should also come in handy. I know it’s a different vehicle but the same principals still apply.

These are very basic steps to diagnosing your issue. I have an 05 mini and my heat will only work for a few seconds and then run cold. I narrowed it down to the flap.