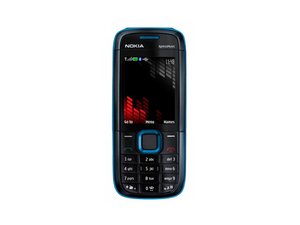 The Nokia 5130 XpressMusic is one of Nokia's mobile phones in the series of XpressMusic. It was released in January 2009 and discontinued in 2011.

My cell phone was flat when I try to charge it, It wasn't. I tried to change the battery to another phone and the battery was charging. I took it for repair they said its a software problem but thay cant fix it because they the phone cannot ready the software. now I want know it means now my phone is useless? there is no way it can be fixed I mean its 1year old.

did you try a new battery? or charger? in some phones when the battery is dying it will not give enough power to boot up fully. Did you try to update software on pc?

definately its not a battery because I have change the battery to another phone the battery was charging if I use new battery to my phone still does the same thing. I have taken this phone to 3 different people they telling me the same story that its a software problem but no one can fixit. they say it can not read the software.

did you try to start it without the micro sd card ?

but i think it sounds more like a "real" problem ->

since it's a BB5 Phone that uses the NOKIA CA-101 Data Cable - you could "easily" try to flash the software on your own.

many phones had the CA-101 Data Cable in the box - if you have it, you could try to update it on your own (if you don't have it, you could get a fitting cable für 2 or 3 dollars (sony ericsson android phones, motory defy & RIM phones are using the same connector type and they work also on nokia's.

BUT - you cant flash the software with the regular nokia updater that program only works on "living" phones.

dead phones must be flashed with other programs like JAF.

if the phone memory is "gone" - the phone is most likely gone too - there is no way to fix that problem without the proper tools, knowledge how to use them and the spare parts!

Will one lose the contents of the phone memory - i.e. sms's, photos and notes?