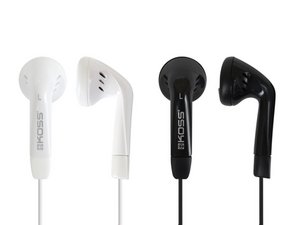 Firstly, please be advised the help is not for Koss Earbuds but only one I could select.

I have a single earpiece PS4 earbud with Mic build in which came with the PS4, and although I have another headset sometimes I like to keep one as a spare just in case the other fails.

It has a TRRS jack (Tip/Ring/Ring/Sleeve) with 4 cables: Solid Red, Red/Copper, Solid Copper and a Solid White, on dissecting the jack plug I noticed that some of the wire weren’t soldered and were literally making some kind of contact from just the black pvc casing holding them in place, therefore I am now unsure which points they should have been soldered too.

I am okay with a soldering iron and I understand that the cables are as follows:

My question is which pin should I solder to on the jack plug i.e. the Tip (left Audio) or the Ring (right Audio)

And would it cause a problem if the Left Audio or Right Audio is left with no cable affixed.

I have tried to research via Google/Bing and everything links to a 2 piece (Left and Right) earbud or headphone.

Your kind assistance would be kindly appreciated so I can repair these and set them aside in desperate times.

Hi - Not sure specifically about the PS4, but generally, use the tip for mono audio. You could connect the earbud to both tip and the ring next to the tip, to feed both L and R to the earbud, but joining them together might conceivably upset the PS4 (though headphone outputs are usually designed to withstand this kind of thing). The “proper” way to do this is with a small resistor between each and the common line to the earbud, so the L and R channels don’t fight with each other.

So, if the PS4 has an option to select mono sound output, just wire the earbud to the tip. If not, it’s trickier - you can do this in-line, or in the body of the plug with some care and some surface mount type or very small resistors:

Note that there are two standards for these TRRS mic & headphone connectors, the one shown with the sleeve as the mic is the most common (CTIA standard), and I think the sort used by the PS4. The other standard (OMTP) is older and has the mic and ground swapped, so the sleeve is ground.

You list your wires as mic, positive, negative and ground - does your earbud need power for the mic? Usually, a CTIA jack will supply +5v (ish) through a resistor to the mic connection, and, inside the device you’re plugging into, the mic input will be routed via a capacitor to remove the DC 5v. If your mic in your earbud is routed via a capacitor in the earbud, with the “positive” supplying power to the mic, then you’ll need to supply the bias voltage too. You might have mis-assigned the wires though - they *might* be left/right already mixed in the earpiece with resistors as above, plus mic and ground, or they might be mic+ground on one coax or twisted pair, and earpiece and ground on a second pair, or they might simply be mic, earpiece, ground and not-connected. You’ll probably need to do some checking.

Hi Carl, I have added a little more information to this post.. please can you take another look and assist. Kindest regards

(Unless it was originally designed to have power supplied for the mic via, say, 'P', in which case it seems a bit odd because the earpiece would be between P and signal (but I guess that would work.) Very few devices would be set up to supply just power on one of the connections, though, it's more likely to be rigged up with power supplied to the mic down the same wire that returns the signal. There're plenty of web pages explaining how electret mic capsules are typically connected to computers etc. - see for example the wikipedia article https://en.wikipedia.org/wiki/Electret_m... )

Yes you are correct, N and P pass straight through to earpiece. I am also a little baffled because my understanding is that if you have multimeter and connect 1 end to 1 side of N and the other to other side of N you get continuity (which I do) however if I connect N to P I also get continuity .. Does this mean there is a short which I have missed?

If 'N' and 'P' go to the earpiece I would expect continuity between them but not zero ohms - the earpiece coil will have a resistance that you should be able to measure, whereas a direct connection will show 0Ω or close to it.

The SMD components look like resistors, but one might be a capacitor - they are (probably) to do with biasing the mic capsule - the mic capsule incorporates a built-in JFET (as an amplifier) and there's probably a resistor to ground to move the source a bit above the minimum gate voltage. What the other two components are depends on how it's arranged and how it's expecting to be powered. You can only really establish this by examining and drawing out the circuit or trying things out.

I wouldn't recommend trying to re-solder one of those TRRS jack plugs too often, by the way, they have a nasty tendency to melt, so either obtain a pre-wired one, establish which wires go to which part of the jack, and then do the experimenting at the other end, either splicing with existing wire or soldering onto the mic board in place of the existing wire - you can get 2m+ long extensions with a TRRS plug on both ends, that can be cut to make two pre-wired leads with TRRS plugs - these are so cheap that the pain of trying to solder to one of these yourself is barely worth it.

Often, you might find you have some kicking around unused - e.g. the AV adapter for a long-dead camcorder, or something like that. Or indeed old headset leads, obviously.

Okay so this does seem a little more technical, I can manage a little as am a Noob to Electronics but from what you are saying I think it is best I provide these images for guidance.

Please refer to attached images, apologies if they are not the clearest, however I hope you can see where I am referring. 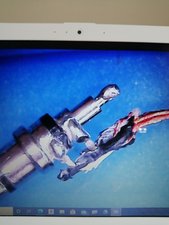 - image (TRRS jack) you can just about see the white (MIC) wire is connect the the Sleeve, however the other wire attached I cant work out because it is moulded in with the black plastic. 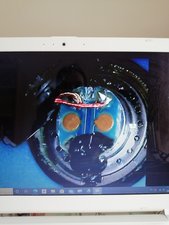 - image (Single earbud) you can just work out that the wires used are solid Red, and solid Copper. 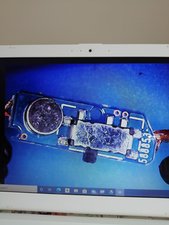 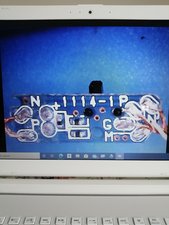 - image (Back of PCB Mic slide switch) you can just work out the wires as I previously mentioned above and the 3 SMD components used.

Again apologies for the images and possible lack of information, had a realised this was going to be a mission then I may have just binned in, but since I have it apart (using my ESD wrist strap and mat) I feel I need to complete this repair and give myself a pat on the back hahaha

And of course will give my appreciation and approval to you