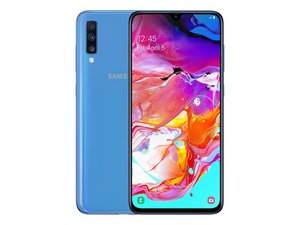 Screen is black and has occasional white flickering lines

A few hours ago, my screen suddenly had a white horizontal line on the side but it still worked fine, the line was just blocking a small section of the screen. Then suddenly, after a few seconds on fondling with the phone, checking if the screen had any other problems, the screen went black. I pressed the power button but it didn’t work. I tried charging it but nothing happened. I held the power button and volume button for a few seconds and the phone vibrated but nothing else happened, the screen was still black. Occasionally, two perpendicular white lines pop up on the screen for a split second. Other than that nothing else has happened.

I remembered using the phone with my hands slightly covered in oil but I don’t know how the oil would have gotten into the thing because I don’t remember touching any openings and I don’t know how a tiny bit of oil could just break the entire screen.

I had the same problem few day ago with phone and nownits working again. Please try this. Connect your phone to a charger then at the back of your phone please press 1 inch above the samsung logo as hard as you can for 20 seconds. Your phone will automatically charge up and will work back to normal.

thank you! it surprisingly worked for me! how did u figure it out??

bruhhh how did this work?? you are a genius, thank you!

I have no idea how this works but THANKYOU

you are the man!

This hasn't worked yet. I have it on charge & have pressed at back, 1 inch above Samsung logo. It is still doing same horizontal, white flicker with the vibration noise after the flicker? Any help would be greatly appreciated 🙏

It sounds like the screen is damaged and will need replaced. Did you drop it in the past? Do you put the phone in your pants pocket? These are possible issues that will damage the screen.