Is it possible to install TWO 2TB SSD 2.5" Drives?

I’m asking because there seems to be a question as to the capacity of drives in the optical bay… something about 750GB?

I’d REALLY like to just put TWO 2TB drives in as they’re really cheap now ($199) and it’d be a great upgrade to have. Any answers will be appreciated. 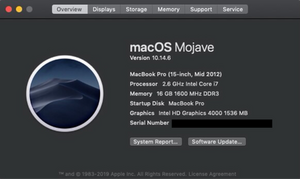 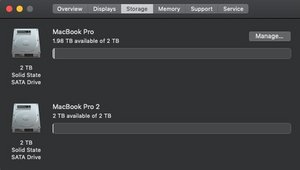 You do need to be careful as some drives don't have any onboard RAM to hold the table ({https://www.tomshardware.com/reviews/dra...|DRAMless SSD]) so they are cheaper and slower!

Yep the Crucial on Amazon

There are different issues at play here …

Lets start at the top level first, what is the limit of OS-X/macOS - The largest you can go in a single volume is just short of 2 Exabyte within HFS+ and even larger with APFS (I don’t recommend using APFS on SATA based systems). So YES! You could do it from this perspective. But there’s more to the puzzle!

Space: The physical limit of the bay will constrain what will physically fit. This is where you are likely hitting as the given SSD size needs to not exceed what the special adapter can hold: (WxHxD) 100 X 69.85 X 6.8 (mm).

Power: The larger the drive the more power it needs, but to be clear two SSD’s require more power than one larger SSD of equal storage! So getting a single 4 TB drive will require less power than two 2 TB drives. This will effect your battery run time.

SATA I/O: Do both SATA Ports offer SATA III (6.0 Gb/s)? This series it does! If you have something other than a 2012 model you can have issues!

The 2011 models and older have a logic board issue in the optical bay SATA logic. Here’s a good writeup from OWC on it OWC Data Doubler you need to stick with a fixed SATA II drive if you have one of these systems.

SATA Performance: Using two I/O channels can be more effective than one I/O channel. But, not in all cases! If you isolate the OS (boot drive) and the apps to one drive and use a second drive for your data then you can have better performance when the data set is very large. Like large video & music scores, other uses like image processing and DB’s can also gain performance but not as much. Having two volumes (either on one drive or two) can be effective from a backup strategy if you are good in isolating your apps from your data. You can also invoke tighter security on the data.

SSD Performance: This is tricky! As a single larger drive has a faster read/write compared with the same series which is smaller in storage space (a 1TB drive is faster than a 512 GB) . But! the technology of the flash cell can have big performance and life span ramifications. Here’s more on this Wikipedia - SSD

Your work flow: This gets into your work process and what the applications and data sets would find the most efficient.

Price! While not obvious the price per GB is less with bigger drives! So a single 4 TB drive is cheaper than two 2 TB drives.

So! Where does that leave us?

My own 27” iMac uses two SSD’s a 512 GB and a 2 TB. The 512 is just running my OS and apps, whereas my 2 TB is my data drive. I did this to gain the performance of the dual SATA III (6.0 Gb/s) channels this system offers, yet not waste space on the primary drive which won’t be used. So what I would do is something similar to this in your system. figure out what your work flow needs for a boot drive, apps, libraries, cache, virtual RAM and any scratch space allocations your apps use figure on that being what you need plus a bit more space for growth. The data drive is setup to support my data I will be working with and any data I will likely want (i.e. music). Today I’ve migrated my work to a 2013 Mac Pro with a 2 TB blade SSD and a 8 TB external Thunderbolt RAID drive!

So don’t get so hooked on the size and focus on your needs.

So its close to a wash with the SanDisk drives.

I did forget the 4 TB drives are still sold at a premium! Was thinking 512 GB and 1 TB.

I'm told the max capacity an optical bay on a 2012 MacBook Pro Unibody machine can hold is 750GB.... THAT is my question. Can I put a larger capacity drive in there? Like a 2TB or more? No one seems to be able to give me a clear answer. :/

@rmcluesman - I did! If you want a black and white answer then:

But thats not the best answer! Which is why I gave you the full run down!

Incorrect I went ahead and installed them anyway, to see, and it works perfectly no problems