Original issue: Headphone jack did not work. It did not register if even something was plugged in (per the icon in the bar not appearing), even after restarts. The 3.5mm jack did not have the “click” of the headphones in the speakers, and the jack felt as though a spring was off.

I replaced the headphone jack (followed the guide) and, after the new part did not fix the issue, I opened it back up, used an AUX cord to test the jack’s continuity, found that the jack had no problems. I then tried to test the continuity between the connections on the board and the jack, as it just ‘sits in there’, no spring-loaded connectors, only to find it looking to be right, although I did not have a small enough probe size. Does this mean I will need to replace my logic board?

Side question: does the number of pins in the jack (5) mean that it will work with both Jack standards? 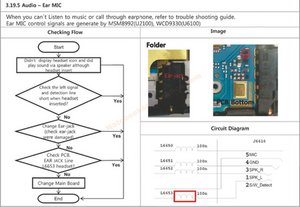 I am having a bit of trouble. I answered “yes” (did not display icon, still played through speakers) to the first question. Does that mean the bad part is ‘L6653’ coil? Thanks!

@catshifter it means that this could be the part in question. You will always have to check deeper.