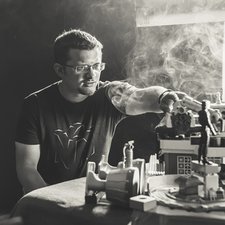 As the title says, the pro controller right analog stick is registering some slight drift in game even though the stick itself is in the neutral position. It doesn’t happen all the time, and usually stops when I correct it, but it is definitely annoying and I’d like to fix it if possible. Anyone else have this issue? Thanks in advance!

For anyone else wondering, I was able to fix this by using the control stick calibration tool in the Nintendo Switch settings menu. I got no more drift after doing so.

UPDATE: This fix only worked temporarily. I’ve since ordered a replacement analog stick from the ifixit shop, and will be replacing it soon.

UPDATE 2: Took me far longer to get around to replacing the sticks than I expected, but I finally got it done! Part of the reason it took so long is that desoldering the original stick was a nightmare with my normal soldering iron, and I gave up after my initial attempt. Within the last few months I decided that for this and other projects it was worth investing in a Hakko desoldering gun. If you intend to solder and desolder more than just occasionally, I can’t recommend this tool enough. I spent hours trying to desolder the analog stick, and failed. The desoldering gun got it done in minutes. That said, it’s an expensive tool, so if you don’t make a habit of soldering, you’re better off taking the controller and the part to a repair shop and paying them to do it.

UPDATE 3: I am trying to recalibrate the sticks after the replacement, but while they are working, they cannot reach far enough in certain directions to register with the calibration tool. I am looking into why this is and how to fix it and will update when I have an answer.

Did it fix after getting new joystick

so new possible fix discovered. i just fixed my controllers drift because i noticed some of the soldering on the inside was weak, decided to put some more solder metal on the weak looking connections and the drift is gone. so please for anyone looking check the inside for weak soldering

Here is how to rest the controller to zero the left and right stick:

Try it a few times, turn off the system and try it again, then turn on the system, let it load to the menu, and try again

If that doessn’t work, i can think of two options, disconnect the battery inside for short time, then repeat the process.

Finally, i had the same problem with my wii U Main (With the screen) controller, and the controller part inside had to be replaced from playing Splatoon too much :) - i got it for $10 and did it in 5 minutes.

Thank you! Somehow it hadn't even occurred to me that it could be software and not hardware. I'll check it this week and let you know how it goes!

Excellent, glad to be helpful :P

Ps. click the answered button if it works out for you!

So unfortunately your method did not work. I was able to fix it though, at least as far as I could tell. Nintendo's own customer service site mentions the control stick calibration tool in the Switch settings menu. Using this tool worked perfectly! Hopefully it stays fixed. Thanks for your help though!

Sorry i went away for a while, this summer is SO nice :)

Ultimately you found a way to fix it, and that's what counts!

If the problem comes back, this will be the best place to come .

lol... i'm promoting this site because i just like fixin' stuff :)

The reason the controllers get dusty and start drifting is because Nintendo used Graphite as conductor for the analog stick instead of copper.

Graphite is great for electronics tbh, it’s almost the same thing. But turns out that graphite isn’t good with attrition (I know, go figure), meaning that using the analog creates dust inside your controller, that messes up the position sensor. It’s pure and simple design failure. The dust isn’t coming from outside, if anyone was wondering…

and yet they still persist to push this hardware out in even brand new oled model. WTH nintendo? 8bitdo for life, ill miss hd rumble tho

Can we file a lawsuit for pro controller too?

It’s a really big issue all four of my joycons went back to Nintendo a month ago due to drift of the analogue sticks Nintendo replaced two and repaired two. They just made it back before Xmas after having them 3-4 weeks! After a week two are already drifting again!

Its a major issue and if I’d know I would have bought my kids another console! In talks again with Nintendo now to try and get a PROPER solution!

Yeah it’s definitely frustrating. Switch is a fantastic system but the durability of the controllers could definitely be better. Recalibration the control sticks only worked temporarily, so I’ve ordered a replacement part from ifixit and will be performing the repair in the next week or so.

dust can get under the flaps of the joycons sometimes and that dust pushes the joystick so that it drifts. Not always the case but commonly is

not dust from outside... its dust from the graphite strips that the stick rubs off and creates false inputs on the other strips... it also wears out in basically 1500-2000 hrs even on gentle use. Joycon and Pro both have this flawed module.. but even not the swithc lite and oled are going to have them to.

“Drifting” is a problem with both the original JoyCon controllers, and the Nintendo Pro Controller. I have experienced both and found that calibrating, updating the system, re-syncing the controllers…do not help. I am convinced it is simply a design flaw. Whatever the case, a controller that costs over $60.00 should last longer than a month with normal use.

Yeah, I'm a little disappointed with the endurance of the controllers. Hoping they fix it in future hardware revisions, because Nintendo has a great track record for hardware quality otherwise. Meanwhile, I've purchased a replacement stick for mine and will be performing the repair soon.

It can't be the build quality of the devices because the sunwaytek sg-n30 wireless controller not made by Nintendo also does the exact same thing. Right analog stick drift. Usually if I disconnect the controller and re-pair it it works for a while. It has to be something in the switch software that causes it. It's just too coincidental that a third party controller (only two weeks old at that) would present the exact same issue. ,

I believe that's the case because it's happening with all my ps4 controllers and only when connected to the stitch (via threw bluetooth control stick). It also effects all four of my switch controllers as well.

Reading all of this just has me realise Nintendo will go down as the next most disappointing video game company. They're finally gonna be there with Atari and Sega. Microsoft and Sony will wipe them out. Goodbye Nintendo…

no they wont because the casuals keep buying these up in droves. and the kids all over getting all that cherished ip they perfectly curate... nah nintendo does their stupids, but they wont ever fail.

I got a fix, if you pull on your joy con little bit, then if u blow really hard the dust flows out and it is fixed.

I fixed my drift (verified in calibration screen) by taking out the board from the controller, using an electric airblower on the offending joystick with the thumbpad off, then applying a tiny dab of super lube to the rod (see purple arrow) 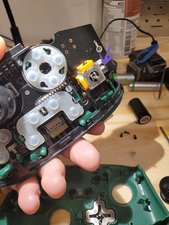 Problem is that once the part that drags over the graphite breaks through the top layer it will start digging a trench through it and quickly make more.