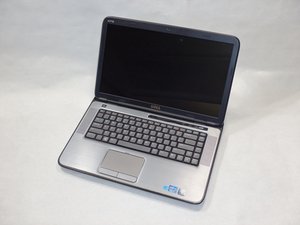 The Dell XPS 15-L502X laptop was manufactured by Dell Inc. It was released in 2011 with a 2nd Gen Intel® Core™ processor.

How do I open this stripped screw in my laptop? 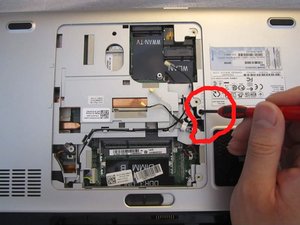 So, the screw the guy in the picture is unscrewing is in a hole and releases the CD tray. Now, that is stripped in my laptop. The laptop is 5 years old and has serious overheating problems. I think it needs to be cleaned and the heat sink paste needs to be changed but I can't get to the inside without opening this screw. I have tried sticking aflat screw keywith 2-3 kinds of adhesive like superglue and leave it for 10-12 hours. It sticks firmly, but as soon as I try to turn it, it comes off. I also took the laptop to 7-8 repair shops but all of them were unable to do it. Can it be removed?

@chanadler this will totally depend on what the srewhead looks like right now. Sometimes a larger size screwdriver will have a bit more bite on it. If that does not work, I'd drill it out. Use a hand drill (not a powered one since it could pull in to deep) and a bit as large as the screwhead. This will ultimately take the head off but leave the threaded part of the screw in. Once you remove the case, use a pair of vice grip like pliers or a good pair of hemostats and remove the rest of the screw.

@oldturkey03 The problem is that the screw is in a hole. Things like the vice grips wont reach it

That is correct, that is why I would use a had powered drill to remove the screw head. Remove the rest of the screw after you removed the case.

@oldturkey03 hmm. It's not possible as the case won't come off. The screw holds the CD tray. Without removing the CD tray, it can't be opened further

The only way I can see you getting it out is by drilling it out. Looks like the screw is a 2mm screw so use a bit that size and give it a try. There really is not other way, unless you get a screwdiver that is big enough to get some bite on the stripped screw head

@chanadler I was having the exact same problem today and I thought I was done for. However I was able to successfully get the screw out using needle nose pliers and a small flat head screwdriver.

Essentially I used the needle nose pliers to rip out the thin plastic which surrounds the screw hole. 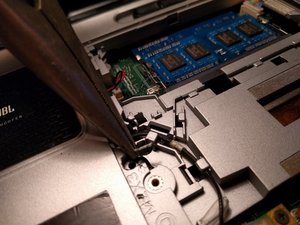 My original intention was to use the pliers to get a hold on the screw, but that quickly proved to be impossible. Then as a last ditch attempt, I used the small screwdriver as a lever to get purchase on the now exposed side of the screw. 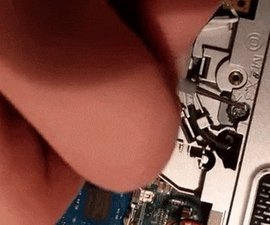 If the gif above doesn't play you can see it my very shoddy but effective attempt here: https://imgur.com/a/1Rz8B

One of many estimonials to us from a customers with a similar problem.

I’ve tried everything I could find to help remove stripped screws… I was skeptical of the friction drop method.

However, after trying it, I can tell you a huge fan! Spit/abrasive, valve grinding compound, and any other DIY friction drops are NOTHING compared to EZ Grip.

Just to test, I stripped a Phillips screw until it was absolutely GONE, just a tiny bowl left with no channels for a screwdriver to catch on whatsoever, and with a couple drops of Ez grip and slow, heavy pressure from a a drill with Phillips bit and IT CAME OUT!! Amazing!!

Go to Amazon or www.ezgrip.net and order a bottle of EZ Grip Friction Drops. If not working on an aircraft you should just order the Commercial Grade.

Drilling something is fine, but no one above mentioned to VACUUM THE FILINGS out of the laptop. Drilling will likely leave tons of filings of a ferrous nature. These could short traces or other areas inside the laptop. Drilling would therefore be my last choice. If you are going to drill, turn on a shop vacuum or any vacuum for that matter while you drill. At least that way, the last amount of filings possible will go into your device.

Before drilling go to Amazon or www.ezgrip.net and order a bottle of EZ Grip Friction Drops. If not working on an aircraft you should just order the Commercial Grade. It's the best way to remove a stripped/stressed screw.

Before drilling go to Amazon or www.ezgrip.net and order a bottle of EZ Grip Friction Drops. If not working on an aircraft you should just order the Commercial Grade. It's the best way to remove a stripped/stressed screw.