Back plate reinstall procedure of the orders of screws

Alright so long story short, I believe that for those ones who ever took apart a uni body Mac before are very likely to run into a constant scratching-ish sound when theres a force applied to the bottom cover if the bottom cover has not been properly screwed back during the reassembly process. For the optical drive era this is entirely not a problem since Apple DO provide an official instruction back in the time (due to user replaceable HDD & ram I assume). for the retina modules its also still not a big issue since there is still 10 screws at the bottom and as long as following the guide for the non-retina modules, there is still not a single problem of perfectly putting it back together.

But after the 2016 modules turn out to have only 6 screws at the bottom and two additional sliding style clip near the ventilation slot ( or call it air ejection slot) and two button style on both side of the machine, next to the ventilation slot for air sucking and subwoofer, which is extremely challenge to open it made me having no clue of how to properly put it back, after multiple attempts and following the order refer to the image attached, I was able to reach a semi-perfect condition, way lot better than just throw it on, but the scratching sound is still definitely there, and I haven't see this mentioned by any tear down related to the 2016 modules, (for older ones, yes) so just wondering if anybody happen to have better solution or even the official procedure of this, and tons of thanks in advance XDXD 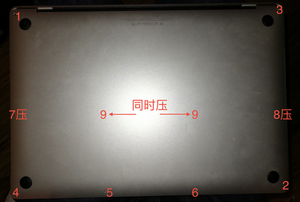