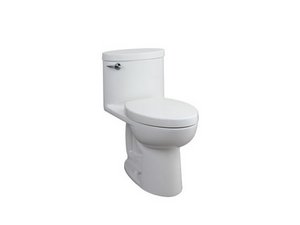 A sanitary disposal device for human waste. No plumber necessary! Fixing a toilet is more straightforward than many people think.

How to fix english toilet on Indian one without disturbing allignment

I have Indian style of toilet.

My nephew from Dubai insists on installing an English toilet. I want to fix my indian style toilet without damaging/changing alignment. I do not mind having separate flushing arrangement.

Some useful information on how a toilet works: Flush toilet

If your bathroom is large enough you might be able to install both. In Europe it's not uncommon to find a toilet, a bidet, and now even a unisex urinal!

Who knew that Thomas Crapper didn't make it to India. He was British.

@mayer , very interesting. January 27th is officially Thomas Crapper day. I wonder what they do to celebrate it. :-)))

@lpfaff1 Obviously people make a deposit in honor of his namesake.

Basically you have a squat toilet like one of these: 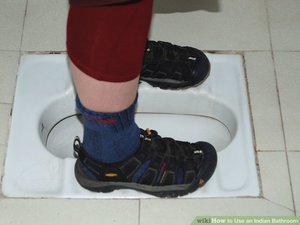 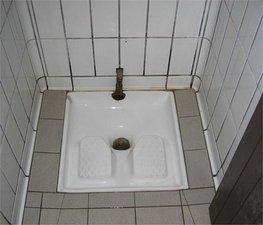 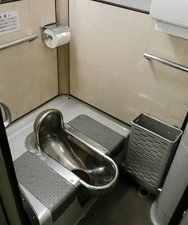 Many people still have them in use thoughtout the world. Some are flushable, others not.

First before you even think about going with a Western toilet (English), you'll need to find out if you are allowed to. Contact your local sanitation authority to see what is possible or required if you haven't already.

Some countries don't want people to alter their toilets as the amount of water they use can be quite high which gets into if you have enough water (arid areas), the water lines are able to support the demand and then the sewer lines able to support the extra affluent (dirty water) and lastly the processing of the sewage.

In Europe they demand a two flush system one that is light for urinating (pee) the other heaver for feces (solids). Even then these are low-flow toilets so as not to waste water and overload the sewer system.

In North America we have been lucky as many areas have lots of water, but even still there is a movement to lessen the amount of water being used with low-flow toilets as our sewer systems just can keep up with the amount of waste, and in some areas drought has also effected how we do things.

As for which is better, it's mostly a cultural issue as well as what is seen as being cleaner. If you have a flushable squat and people clean up after them selves then they are no cleaner than a western style.

Many woman prefer a western as they can keep their dresses cleaner and older people who have a hard time squatting likewise prefer the western.

Men who urinate often make a mess as the target is smaller and farther away. Even still men often mis the bigger toilet too!

One option if you are more of a squatter is to find or make a step frame like this: 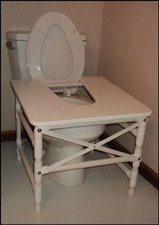 Which allows you to use a western toilet in a squat position.

As I explained you need to speak with the local water authority. Some countries have explicit regulations on altering the sanitary system.

Don't forget the household here is trying to accommodate their nephew from Dubai who wants an English toilet. So they too would need to get accustomed to the new toilet which they may not like.

I've traveled quite a lot and have seen quite a few different setups. I still believe "When in Rome, do as the Roman's do" and not impose my beliefs or habits onto the local culture.

U r right sir. I m an old guy of 68. I have been habituated to Indian style toilet. However after starting knee joint pains since last 5 to 6 years I m finding it difficult to use Indian style. I don't get western chair like style every where. I may have to carry with me the support or footrest with me wherever I go. Is there no permanent solution to this?

Add a 4 inch pvc pipe to indian toilet drain and extend it to 6' above surface or floor. Put pvc solvent around the old drain to seal it from outside. Now fill the old toilet with sand till the surface or floor , only the new pvc pipe should be visible. Now place a slab of granite with a hole for new drain pipe over the sand to form a floor, put some white cement to close the gaps between the old floor and granite slab,, after cement sets you can add a new western toilet over it.