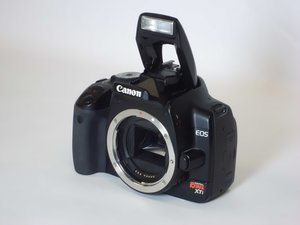 Known as the Digital Rebel XTi in North America and EOS Kiss Digital X in Japan, the 400D is a budget Canon DSLR released in 2006.

camera will not turn on even though battery says its fully charged.

Sometimes battery packs fail in such a way that they can no longer accept charge. The charger will say they're full: you put in the battery, the yellow light (charging) will come on maybe for a second or not at all, then the green light (battery full) comes on. But of course, since the battery holds little or no charge, when you put it in the camera, it won't power up.

I've had a battery fail in exactly this way on my 400D, and also once on my 50D. In both cases I had spare batteries, so I could figure out soon enough that the problem was with the battery and not the camera (phew!)

If you have a multimeter or know someone who has, you can quickly check if the battery is bad. Measure the voltage between the + and - terminals (they're labelled), it should be at least 8V for a charged battery. If it's less than 6V, the battery is definitely bad.