Trackpad Does not Function Properly 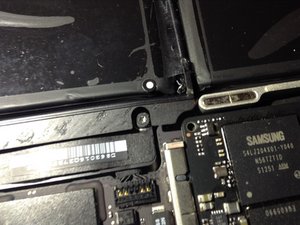 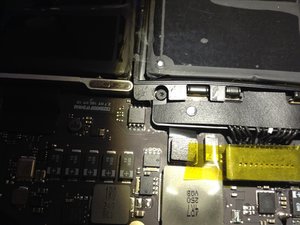 Machine came in "Out of Africa", with the trackpad not working. Running 10.11. It will move the curser a little bit and erratically. A wireless mouse was being used to navigate. I replaced the trackpad with a new one, also the battery at the customers request, ( he had me order these parts before I had a chance to see the machine). Problems persists. Ran virus check and caught a couple of minor Trojans and removed them. Problem persists. Booted from an external hard drive to see if it was a software issue 10.10.5. Problem persists. Safe Mode, persists. Works well with both wired and wireless mice.

I'm stuck. Machine was very dusty on the interior but I blew all of that out. Any ideas on where to look next?

UPDATE 10/13 none of the updates will run on 10.11 system. Put in Target Mode, wiped the drive, did an internet restore to 10.8.5. Updates will not run nor will the trackpad work. I'm stumped. Senior Apple Tech is telling me to replace the logic board.

UPDATE 10/16 I have no idea of where to go on this one, without some help I'll have to send it in to Apple for a depot repair later today.

Problem solved. I replaced the original trackpad and battery in preparation to send it to Apple for a depot repair, On plugging the battery in it booted. Black screen with the white Apple and white progress bar. As it booted a small white progress bar in the lower left hand corner went through a run. My guess is the EFI Trackpad update finally kicked in. Any way the track pad works fine now. Booted from an external hard drive that I had backed up the 10.11 system and original data on and the machine runs fine. Am I correct? Was that small progress bar in the corner a hardware update?

What happens when you put the old trackpad in? Is it working now? Sounds like the SMC reset might have been the kicker here.

So basically the fix was to wipe the stick from an external source and install a new system. This also installed the repair partition correctly and the new system has the trackpad update already done.