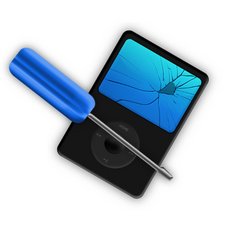 I have an iPhone 4S that got briefly dropped in a sink (so got wet). It worked right after, but had some issues with the speakers, so we turned it off and put it in rice for a couple days. However, now it doesn't start up at all, it shows the apple logo though (so the screen IS working), but keeps restarting itself when plugged in.

I've tried restoring it from the computer, but when it tries to restart, it gives an error.

I've tried this also with the battery taken out, and it has the same issue.

Any thoughts? What might be wrong? Should I replace the battery or another part? I've opened it and it looks ok, no apparent damage, but just won't start up past the apple logo.

iTronics Repair, just because it looks okay, does not mean that it is:-) Rice does not fix any corrosion or short circuit. The very first thing that you want to do is to disassemble your phone and clean everything with a high grade isopropyl alcohol, do not forget the connectors. Use a soft brush to clean it with as well. Check for any missing, burned, or otherwise damaged components. Once cleaned, replace the battery. Remember that the batteries are smart batteries. They do a lot more than just store energy:-) Re-assemble your phone and re-evaluate for further, if any damage. Hope this helps, good luck.

Thanks, I'll try this! Do you know a good place to get a high grade isopropyl alcohol? Is this different than standard rubbing alcohol, and is there a store I could try, or somewhere online?

Also, what do you mean that the batteries are "smart batteries"?

I'll let you know what I find out. Thanks!

I get mine from a local pharmacy. Rubbing alcohol at the department stores is usually just 70%. "Smart batteries" supply feedback to the device about their charge cycle, their overall condition and a few other things...

An update: I took the logic board out, cleaned everything off using isopropyl alcohol. There were some small patches of corrosion, which I cleaned off. I also bought a new battery.

After this, I let everything dry off, then reassembled and plugged it in; almost everything worked (buttons worked, wireless worked, screen worked), except I couldn't get service (it just gave me No Service). Then, after an hour or two trying to update it, all of a sudden it went dead again, now it just keeps restarting when plugged in, but I can't get any further, so I guess I'm stuck.

Any suggestions for a next step? Thank you!

Water damage can be a tricky one and the success rate depends on your ability to spot micro corrosions and how well you clean the board. In this cleaning process you may have to replace other components, like the battery or charger port, maybe others.

Once you disassemble the the phone you should drop the logic board in an ultrasonic cleaner with the proper amount of alcohol. If you know how to solder and it is substantial water damage, I recommend removing any shield, you can solder them back together later. Once this done, blow it dry and reassemble.

You should use a new battery and charger port when reassembling, it best practice. Once assembled try top preform a hard reset, given you get a apple logo to show up. Try this treatment twice. If you do have to do it again, throw the board under a microscope and make sure there are no fractures or burnt resistors on the board.

thats exactly what happened to me but i didnt have to change anything but then it did turn on (after two days of being in rice and sitting on a radiator) then i couldnt connect to a wifi and it also stayed on 3% as the battery life. then i turned it off to try sort out the wifi and now its not turning on and only going to the apple sign.

this has been its secong drowning

limza, that is what shows the importance of proper cleaning and replacing the battery. Read the original answer for more.

Do you have a multimeter? Check for continuity between the first and last pin on the battery connector on the logic board.

I suspect there's continuity which means a bad capacitor somewhere. I hope you remember which ares were mostly affected.

Problem is your dock connector. Need to replace.first contact for water to enter

The actual problem is the battery, Nobody else here gave you the correct answer.

@Wesley, actually you are wrong. Read the first answer very carefully "Once cleaned, replace the battery" should be a pretty good indication that this was discussed. Good answer on your part, just a bit late.