Is my keyboard cable in far enough? 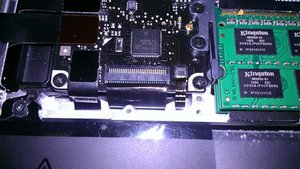 After attempting a repair to my macbook pro this weekend, I reassembled it. The power button does not work. I have read a bunch of topics on inserting the keyboard ribbon cable and how difficult it is, and that this cable routes the power button to the logic board. I have spent a lot of time fiddling with this cable. I've attached a photo of the cable in its current state. Is this in far enough or should it go in further? I just want to know if I should be looking into some other reason for why it isn't starting up. I get no signs of life when pushing the power button, but the LED on the charger does light up and the battery indicator lights up indicating a full battery. Thanks for any help!

Using a screwdriver didn't work for me to help insert my cable. (I had already lifted the retaining flap with my fingernail.)

But once I got the idea (from elsewhere) of using a tab of cellophane (or other) tape as a makeshift "handle" to "grab" the cable and pull it into the socket, I was able to insert it in just a minute or two.

I found that it helped to take a 3-inch (or so) piece of tape, no wider than the cable, and to fold about an inch of it back on itself to create a portion that wouldn't stick to the cable. I put the sticky part as far down the cable as I could easily reach, then used the folded-over part as a "handle" and pulled on that.

Thats exactly how I do it with most of these kapton cables ;-}

This method worked for me after I had almost given up. I used cellophane tape as this doesn't leave any adhesive residue on the cable that could prevent the pins in the socket to make contact (like fabric tape, for instance).

I folded the cellophane tape over to create a handle as you described and left only about 1/3 to 1/2 inch of tape to grab the cable. I held the tape between my thumb and index finger, the latter one reaching about 1/3 inch over the thumb. Then I lined up the cable carefully with the socket, put my thumbnail on the socket and pressed down the tape with my index finger, pulling in the cable with a swift rolling motion.

Thank you for sharing, you saved my day!

It's usually not very difficult to insert the keyboard ribbon cable. The hardest part is usually getting a grip on the ribbon cable itself, or seeing exactly where to slide it in. The one in the photo, however is a little more difficult since there isn't a "tab" on the ribbon to "angle" and pull or push the end of the ribbon cable into the connector. If you're a little older like I am ( early 40's), reading glasses are a big help. I got the most powerful common kind of $10 reading glasses I could find (I only use them for computer repair or looking at fine details on my iPhone 5). They have a "power" of +3.00. Reading glasses (cheap ones) usually come in +1.00, +1.25, +1.5, ... up to +3.00 power (strength/magnification).

Sometimes, you can still see the traces (copper conductive paths inside the plastic ribbon) going into the connector, but barely. If too much is visible, as it would appear in the photo, then it wasn't inserted enough. I would suspect that you didn't release the retaining flap on the other side of the connector first.

Use a spudger to lift this retaining flap. If you don't have a spudger, your finger nail should easily get underneath it enough to lift it up. If you try sliding the ribbon cable in after lifting the retaining flap and it goes in farther, then you've got your answer!

The fact that your charger and battery LEDs are responsive is a good sign that your logic board is still OK. (Though, not conclusive!) The Battery and MagSafe connector are connected to opposite sides of the logic board.

I don't think it's in deep enough. There's an easy way to getting it in easily.

I'll try to explain it best I can.

line up the cable and slide it in a little bit.

Use a flat head screw driver and you want to place it roughly in the middle of the cable between the cable and the aluminum case part. Use the screw driver to push the cable. Basically it would kinda look like a letter C.

What you want it to do is sort of have it like \C pressing a little bit with the tubing of the screw driver NOT the bit. Use your finger to slide it in. Don't put too much pressure with the screw driver or you might damage the cable. If you do enough of these you'll be able to do these without even using your finger!

I second this method. Its all about creating tension on the curve above the logic board level. Yolo way will prevent the ribbon cable disappearing under the logic board on you as you try to insert!

I use electricians tape. A small strip with the end folded over to make a handle.