I remember when rumors went out that Apple was about to unveil the first MacBook Pro with a Retina-quality display. I remember because I was relating to a friend the engineering challenge Apple faced in scaling up from phone-size displays to laptops, without having to discard the majority of them for small defects. I got so excited in relating the world-shaking impact of this that I had not noticed the friend had actually picked up a phone call, right as I was comparing the process to cookie baking.

Now the first Retina MacBook Pro—”MacBook Pro (Retina, Mid 2012)” or A1398, in Apple parlance—is “obsolete.” It was “Vintage” in 2018, meaning that Apple could only repair it if they could find the spare parts, or if you lived in California or Turkey or other repair-minded spots. “Obsolete” means Apple won’t fix anything on your big, crisp MacBook, “with no exceptions.”

What does that mean for you and iFixit? Nothing. We still offer many parts for the first Retina MacBook Pro, along with the guides to install them. If you’ve been wondering what to do with your own well-honed, first-gen Retina MacBook Pro, consider a battery swap, a bigger and better SSD, finally replacing its missing feet, or any of the many other fixes and updates we can walk you through. 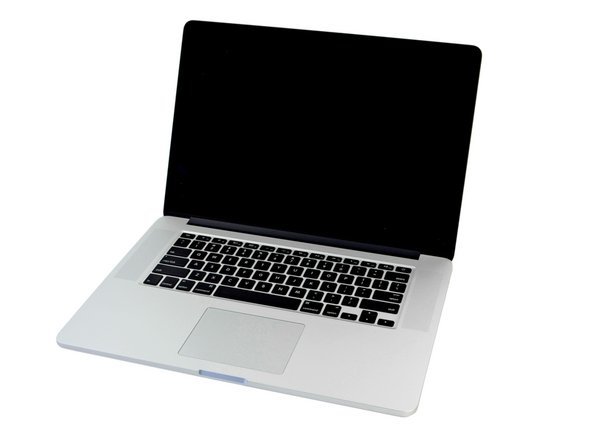 The first Retina MacBook Pro (MBP) is a real turning point for MacBooks, especially when it comes to repair and longevity. The Retina MBP was thinner, because Apple removed its built-in ethernet port and optical drive. But it still contained a host of ports, features, and amenities, before Apple removed more and more of them as the years rolled on. Many modern-day MacBook fans can probably pick out a couple things they’d take back in exchange for a few millimeters’ thickness: MagSafe connector; SD card slot; two (!) Thunderbolt ports; upgrade-and-repair-friendly storage; a Magic instead of Butterfly keyboard; an Escape key.

And yet, starting with this model, all those ports and features, and everything else inside a MacBook Pro, got a lot harder to get to. You can do it—believing in your ability to follow directions is our brand!—but Apple made ease of service one of its lowest priorities.

Removing the battery from the “Unibody” 15-inch MacBook Pro from the same year involves taking off the bottom case, disconnecting the battery, removing three tri-point screws, and pulling the battery out with a plastic pull tab that Apple included. The guide is seven steps. This MacBook Pro scored a 7 out of 10 for repairability in our teardown.

Our guide for replacing the battery for the 15-inch MacBook Pro from mid-2012 is 53 steps. It involves disconnecting everything, removing the entire logic board, warnings about adhesive remover fumes and eye contact, propping your MacBook up on something to let the adhesive run through, and then running backwards through reassembly. Most of the screws are proprietary pentalobes. The first Retina MBP received a 1 out of 10 repairability score. CEO Kyle Wiens wrote a post for Wired, noting the new design had “serious consequences not only for consumers and the environment, but also for the tech industry as a whole.”

And now that first era-defining, vanguard laptop is “Obsolete.” Super-high screen resolutions are the norm. Meanwhile, we’re doing everything we can to make sure heavily glued-down batteries, hidden behind proprietary screws, are not.

Just when ‘lockdown’ started, the screen went blank on my early 2013 MBP 15” retina - I had just received a new battery and larger SSD! - A lot of research later and it looked liked a gpu power supply chip cracked solder joint issue - buying the thermostatic soldering iron, flux and getting the courage (Mostly the latter took up the time) up to take the iron to the motherboard took me another month and a half (made a microscope with my cellphone and a laser pointer lens to see the soldering before and after) - If it happens to you - go for it - but be very careful and methodical. When the screen came up again I was very very happy. I used the cord technique to ‘cut’ the glue under the batteries. Still haven’t changed the SSD - Don’t want to mess-up the BootCamp Win. 10 partition.

What about the 13 inch? To be honest it is running great with the latest MacOS Catalina. It runs great. I know I will have to replace the battery at some point. I keep it updated, and realize Catalina is the last OS for it. It is still 4G of ram, always wanted to upgrade that. Everything still works great. The new ones are just priced too high in my opinion for what they do. Thanks, Russ

On a side note, your tools work great on guitars. Putting in new jacks, or whole pick up systems. I keep all my ifixit tools in a gruVgear back pack. Thanks again for thinking outside the box. Keep it up, Russ.