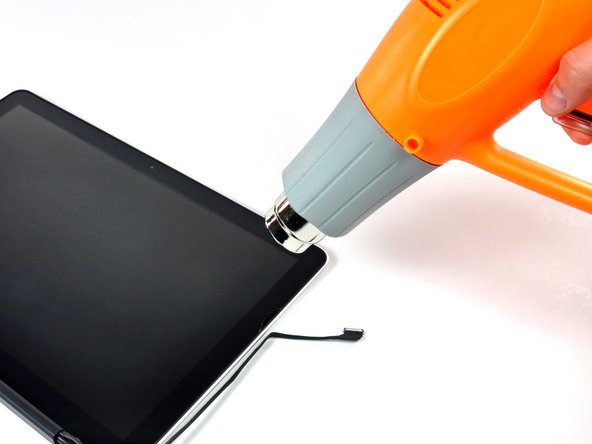 Will the suction cup still work on a heavily cracked screen?

Mine was not all that cracked, but still the suction cups were useless because if you have one crack through the "suction area", it won't work.

I just replace the glass on my 13" MacBook Pro with badly broken glass screen.

The suction cup did not work because a) my screen was cracked badly and the cup would not hold suction, and b) the glue is too tenacious (even with heating) and over a large surface area to simply pull it away from the frame, especially if the glass is cracked.

I found a hairdryer on hottest setting, but lowest speed works best. It softens the glue enough to pry the glass away from the frame. I had to work around the perimeter using the Spudger tool and a small, flat-blade screw driver. I started prying at a cracked opening in my glass (it was really badly cracked - someone stepped on the computer when my daughter left it on the floor!). Need to be very carefull with using the screw driver - only pry along and parallel to the edge of the frame like using an ice scraper on a sidewalk. Don't pry on the rubber seal on the edge and stay away from the LCD.

I left the cracked glass in place until I cleared all of the glass along the perimeter- this allowed me to rest my hand on the screen without damaging/scratching the LCD underneath.

Be aware that the camera cable runs in a channel from the lens on top to the right corner, then down the right edge of the screen. The channel is in the center of the border, so it is ok to pry under the glass as close as you can get to the rubber seal on the edge, and also on the inside edge of the border, but take care not to pry into the LCD. The camera cable is wider and has connectors within 2 inches of the lens, so you really need to be careful with prying in this area. I saved the lens area for last. Started to the left of the lens and worked counterclockwise around the perimeter.

If you take your time, heat a small area, pry the glass away and continue around the perimeter, it will come out. Need to be patient and not get in a hurry.

When the glass is removed, take care to clean out the glass fragments, especially down between the edge of the LCD and the frame. I used a business card to slide in the gap and pull out pieces of glass. Then used small piece of packaging tape, tacky side out, to dab out the small pieces (don't put the tape on the LCD, just the frame border area). Overall, the instructions on this site are excellent - I had no trouble removing the screen from the base of the computer, and re-assembling with the pictures and the instructions.

The connecters all went back in to place very well. The machine worked when I started it up after re-assembly. It works and looks great.

Thanks for the instructions!

Looking for tape just in case I need some to affix the glass. Do you carry this, if so which on would best to use?

Ideally, it could be really helpful if the staff team can improve the article; improve on the steps outlined; using the feedback received in the comments - e,g, safer ways to handle broken glass, use of solvents like alcohol or acetone to dissolve / neutralise the adhesive seal, and ways to preserve the rubber lining, the LCD panel itself, and the additional circuitry & cabling underneath.