Idiot son of an engineer

Autobiography makes for lousy literature, even Errol Flynn had some trouble making an interesting story of his life. Short bios for art shows rarely rank much above high school poetry or personal ads for entertainment value. Still, the only personal ad I ever posted hooked me up with my special-lady-friend of twelve years, mrs. a-go-go, so some skillful show and tell can do some good. (A word of advice, if you're an internet dater, don't use Brown Gargantua as your alias. It'll get you into all sorts of trouble, and even Johnny Sokko will have trouble arranging an extraction.) 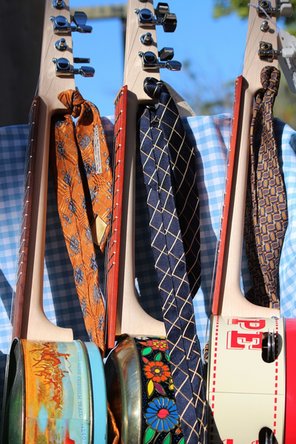 Ukuleles at The Tinkers Damn 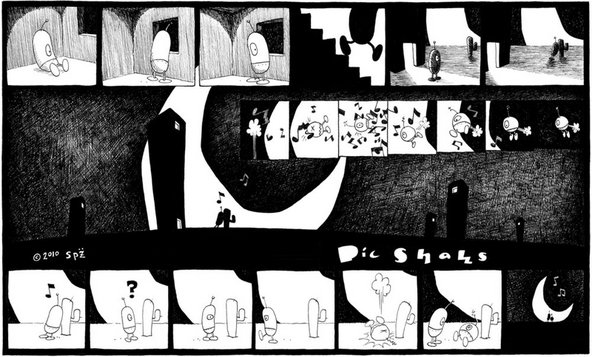 My father and my grandfather were engineers. The sort of engineers that had influence ranging from Second World War weapons and orange juice to space exploration and funny looking sunglasses. Granddad designed many of the stamped sheet steel parts for the Ingram machine pistol which became the MAC-10. Before that, in the 1930's he patented some marvelous air hardened stainless steel knives making it possible for the Santa Barbara Orange Juice Company (in Santa Anna, California... oh well) to mechanize the slicing and juicing of the acid fruit. My dad worked at Rocketdyne before joining The Jet Propulsion Laboratory of Caltech. He was there nearly until the end of his life designing bits of rocket engines and building space simulation chambers to torture space robots with extreme cold, hard vacuum, and ionizing radiation. As a bonus he had a part in the optical science that went into creating Blue Blockers. 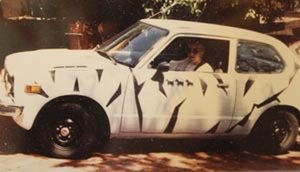 My first set of wheels. Dad taught me how to work the nuts and bolts

So why did't I become an engineer? I spent most of two decades pursuing galleries and trying to sell my art work. I didn't go to art school. No, I got a degree in economics. Why, because the history and sociology attached to the stuff is fascinating. I have had jobs all over the place to support my art habit. My previous day job was at the Los Angeles County Museum of Art where I became a supervisor of installations after just a couple of years as lackey. It was fun and excruciatingly frustrating. Seeing some extraordinary art up close is exciting at first, then it gets really heavy and hurts your back and the curators get on your nerves. I don't miss the weird bureaucracy at LACMA or the idiocy of Planet Fine Art, and we don't miss living in Los Angeles... except for the tortas and the phở.

How did I get here?

After a lifetime in Los Angeles mrs. a-go-go and I (we're older than we look) quit everything for a three month road trip across North America. We landed here on the central coast where we're rebuilding our lives in a new place and with new jobs. I'm happy as a clam to have found a pretty dern good fit (in a swell nonagonal hole) here at iFixit where there's never a dull moment. Heck, they even let me take things apart.

Someday soon I'll have a studio space again... and a garden. Until then cartoons, sock monkeys, and a little writing will have to suffice for my creative outlets.

Exploded View of Motorola i710 with Tools

How to Line Dry Clothing