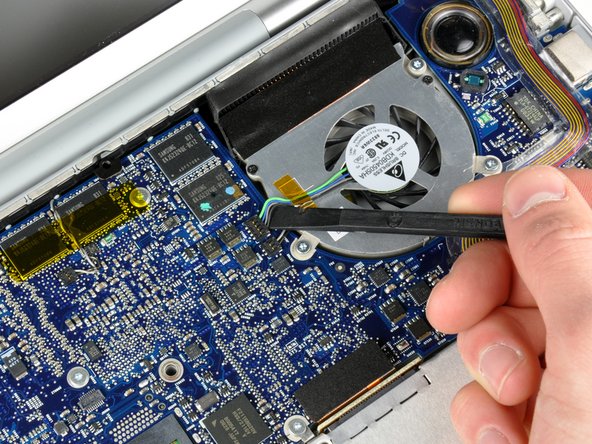 One of the cooling fans in my trusty old MacBook Pro was starting to get noisy, at first only at higher RPM, but then even at low speed. Tired dirty bearings.

I tried ordering a so-called "new" pair of fans from a Chinese distributor, but they were not "new", and worse, they didn't work. They were junk, stripped from old dead Macs! After much threatening and cajoling, I managed to get my money back, and then did what I should have done in the first place -- order from iFixit.

Perfect! The instructions provided by iFixit were excellent, and the photos an immense help.

I'm a retired electro-mechanical engineer, so I'm no stranger to digging into the guts of tech equipment. This repair was easy for me, but might be more challenging for some folks.

Missing from iFixit's instructions were a couple of embellishments I would suggest:

1) Wear an anti-static properly grounded wrist strap before you start. Static electricity can and will wreak all kinds of havoc on delicate solid-state electronics.

2) Use a muffin tin, or several little cups, with Post-It labels: As you remove screws from your Mac, keep the screws from each step of the procedure in a separate cup, labeled according to step number or location on the Mac.

3) Have an aerosol can of compressed air, such as "Aero-Duster", for doing general cleaning and dusting and blowing out of clogged vents in the innards of your Mac while you've got it open.

5) You should re-use the old strip of tape which seals the fan to its exhaust vent -- this strip of black tape also has on it a piece of copper foil. The copper foil is needed to provide an electrical path to discharge any static electricity build-up from the fan's housing to the Mac chassis. (Rapidly moving air, as in a cooling fan, will generate static electricity). You will need some additional strips of tape to secure the old strip of tape, as its old adhesive will be tired, dirty and weak. Kapton tape (the orange-colored translucent tape) is great if you have some, but electrician's tape will do.