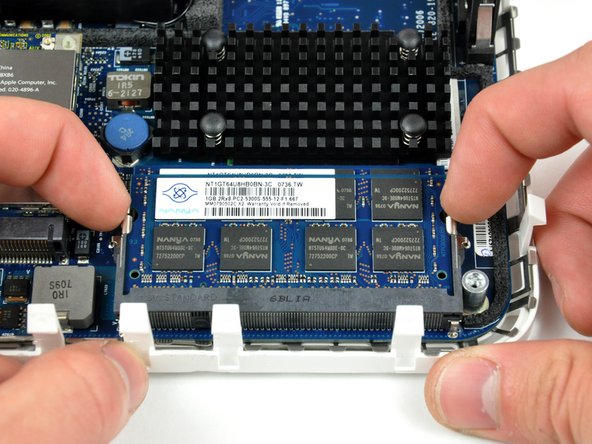 My 2006 Mac mini was still running tiger os 10.4.11. Unable to use many newer applications, update web browser, sign up for nest account for my newly installed nest, etc because computer was too slow. Also it would stall out constantly, freeze up and quit unexpectedly. Needed more memory and new OS. Local repair guy recommended I just buy a new computer.

Overall went very well. Taking the cover off was still difficult even with the isesamo. Actually ended up bending the isesamo badly in order to pop the case off. But once it was off there was no problem detaching and unscrewing things. RAM came out and installed easily enough. Putting things back together was a little trickier. Reinserting the thermal sensor cable was a little difficult but I finally got it. Three of the four screws that came out went back in easily but I was unable to get the 4th in and get it to "grab" anything. After several attempts I finally gave up. It seems to be fine with the 3 screws. I'm hanging onto the 4th to try again later. Afterwards I installed snow leopard and that also went well. Computer seems to be running much smoother now. No problems have been detected so far.

I had been too scared to attempt opening my mac and trying to repair myself fearing I would break it or make it worse. Now I'm glad I saved my money and upgraded myself because it wasn't as difficult as I thought.