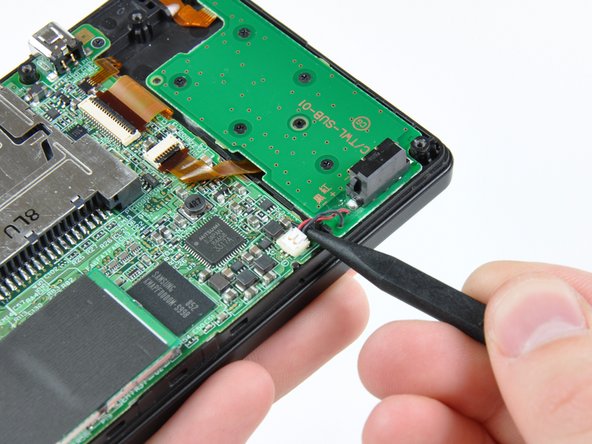 After replacing my son's DSi PS board due to a non working right D-pad button the unit worked fine for a few weeks then stopped working (insert son's unhappy face here). The charge indicator lamp (the middle lamp) was flashing and the unit would not power up. I decided to open the unit up again and I noticed that the two tiny wires (red and black) from the new PS board I installed were 'mashed' as they had gotten pinched by the plastic case during reassembly. I can see (using a magnifying glass) a bit of the wire conductors where the insulation was flattened on both wires. I did not notice the routing of these wires when I removed the old board but now comparing the old (original) board and the replacement board I notice that the wires on the replacement board are a bit longer and therefore the extra length must be placed carefully to not pinch them. Upon further checking however I have determined that although the wire conductors are still intact they must have shorted out because the tiny SMT fuse 'F1' on the new PS board is blown. I have chalked this up the 'installer error'.

The second PS board install was as easy as the first time. I made sure the tiny red and black wires were routed so they would not get pinched. So far everything is working fine again and my son is happy.

Be VERY careful in the placement of the tiny red and black wires that go from the PS board to the main board so that they do not get pinched between the case halves as the replacement board's wires are longer so there is more 'excess' to get pinched.