the late 2009 Model doesn't have a 3rd SATA on board, though is has the corresponding solder pads on the PCB. When I look in System Profiler, there's no 3rd empty SATA port shown (unlike in this guide, which applies for newer models).

Thus is seems there's missing more than a connector and two resistors to get a 3rd port. On the other hand i'm feeling challenged to dig deeper ever since i disassembled my iMac in order to realize I'm missing the port.

Does anyone knows more about this?

While you might be able to connect another SATA device internally you still need some where to mount the device.

You risk interfering with the systems airflow causing the fan to kick in more often, besides the risk of causing something to short on the devices housing. And lastly, you void your warrantee or even a parts exchange (via Apple) if your logic bd. dies.

What are you planning to install? That you can't do externally? With a lot less hassle or risk. Just the fact you can doesn't make it smart to do.

Where one should dare to ask these kinds of questions other than at ifixit? This is not my work or only Mac, so it's more of a fun thing rather than a smart thing ;)

Is it me? Or are we starting to see more Mac system modeler junkies coming out of the woodwork ;-}

Swapping like for like to get a working system is the safe thing for most of the people asking Q's here.

When you start adding stuff within a system thats intended to be closed (unlike the Mac Pro tower) it can be very dicy if you've gone to far. And you do so at your own risk!

That's not to say pushing the edge a little can't be beneficial. Even Apple gets some of it's ideas monitoring sites like this one to see what people are up to. Just look at the Mac Mini and the current iMacs and how they support a second HD (or SDD) internally. I'm sure feedback made it happen.

I think your on the bleeding edge here, I doubt anyone has gone this far.

Any news about the possible upgrade?

I have also been very interested about enabling the 3rd port ever since I tried to install additional SSD drive only to find the port missing.

Picutre of my Late 2009 27" iMac and the empty place for the third SATA port: 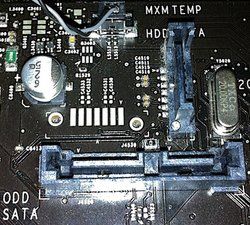 The current iMac models offer two SATA ports (1-HD & 1-SSD). The older iMac systems did not offer a second SATA port (some people wired one to exit the case). As far as anyone going forward here I think people mostly upgraded to newer iMacs. If you are looking for a 3rd SATA port in a newer iMac thats a stretch as there just isn't any room to hold SSD, why don't you just put a larger SSD in instead.

Dan, thanks for the reply, but I am talking about the 2009 iMac and a third SATA port, exactly as the title of this topic says so.

As far as I can tell, some 2009 iMacs were shipped with third SATA solder pads in place, but no actual port. For example the iMac iFixit tore down does not have this revision of the motherboard.

Now the question is, are these 2009 iMac with the solder pads able to activate this port... Because that would be something!

I am attaching a picture of my Late 2009 27" iMac to my original answer, so you could see yourselves.

As I stated in the original post reply I didn't think anyone had gone that far, and doing so would be risky. We are also assuming Apple even fully wired the PCB for this 3rd port.

As others had commented besides the hardware aspect of the connector and some SMT chip capacitors which you can even see in your picture are missing there is firmware and the South Bridge logic that needs to support the 3rd port, and lets not forget the extra power and cooling the 3rd device would need.

So over a year has passed since this post has had any editing.

I had ordered the parts mentioned in another internal dual hard drive upgrade article based on the 2010 iMac that DOES have the third port.

Once in the iMac, I ended up disconnecting the DVD drive Combined Power and Data cable. I used the purchased SATA dual drive power cable to power up the SDD, the and purchased Data cable plugged into the DVD Data connector and installed the SSD in the purchased replacement "Wall" component that Apple used for their dual-drive 2010 iMacs.

My motherboard also has the pads for another SATA Data connector and resistors exactly like the main Hard Drive SATA Port. I, too also considered finding the connector and chip resistors and soldering up the port.

The ultimate question is whether SATA follows the architecture of ATA where the basic controller could manage two drives, one being "Master" while the other being "Slave". With ATA, the Data was on a parallel ribbon cable and the drives needed address jumpers to work properly. With SATA, the Data lines are not shared meaning if SATA controllers intrinsically can handle two devices, it only means adding the second device and the chipset will "take care of the rest" (were it ONLY that easy). The answer lies within the details of the "5 Series" Chipset.

The "About this Mac" SATA Device Tree shows two independent chipsets. Under the chipsets, the drives are disk0s1, and disk1s1. A check of "About this Mac" on a later iMac with the third drive installed should tell definitively whether there is a third chipset or a second port to the original Hard Drive chipset.

Rather a late comment to this , but its been going on years anyway.

If you look on the Apple iMac schematic diagram you will see that the series 5 Intel Chipset fitted in the late 2009 is capable of supporting 6 SATA ports at 3 Gigabit. The third port you see on the logic board is connected back to the controller chip , the missing components are not resistors they are 0.1uf surface mounting capacitors. When you examine through "about this Mac" your serial-ATA Device Tree you will only see SATA devices which are connected, normally the HDD and ODD.

Whilst I have not tried it I am fairly convinced if you could be troubled to fit the SATA connector, the needed 4x0.1uf capacitors and connect a third SATA device it would likely work. This would give you the potential for a Optical, HDD + SSD (possible fusion drive) all in the same case.

But why bother! The optical drive is rubbish, you are much better off fitting a SSD in place of the optical drive, putting in a 2GB SSD and a 7200rpm HDD setting it up as a fusion drive and if you need an optical drive get an external Blue Ray.

Couple of minor points my original post said: Put in a 2GB SSD I meant HDD and a 240GB SSD.

Also if you want to set up a Fusion Drive you need to do it through Terminal in UNIX commands here's a link: How to Make Your Own Fusion Drive

Stuart, a couple of thing to consider, isn't the BUS speed of the optical bay SATA I 1.5 GB/s vs the main SATA II 3.0 GB/s? Would the BUS speed negate the SATA III, SSDs 6.0 GB/s speed? Would you better off with a hybrid SSHD? Are there issues with a Mac running a BluRay Drive? Do you have to install 3rd party drivers? Weren't Fusion Drives introduced in 2012 and can that technology be retrofitted to work on a 2009 machine? https://en.wikipedia.org/wiki/Fusion_Dri...

@Stuart Kidson - I think you're just repeating my points here when I first answered this question. Today, it's just not worth the expense given the age of the system.

I disagree that it's not cost effective , there are a lot of late 2009 machines around running i5 and i7 processors which for 99% of computer users will fully satisfy their needs compared to a new 5 k Retina IMac costing $2000+ so spending a couple of hundred dollars and tinkering on a machine that is well out of its warranty its probably worth it .Those machines are only worth $500-600 on the open market and it's relatively easy to fit ssds and HDDs . But I would not bother with the third sata port , even Apple gave up on that , If you want super slim form over function then you are going to have to put "other stuff" outside your device , Thunderbolt is definitely the way forward but for us tinkerers where's the fun in just buying the latest gizzmo?

The bus speed in the optical bay is 1.5 Gb/s to match the optical drive , The series 5 chipset has a max speed of 3 Gb/s so if you put a SSD in there it will run at 3 Gb/s. You will not benefit from putting a SATA III 6 Gb/s device in either position in the late 2009 Mac is the Lynnfield chipset max is 3 Gb/s . The next generation Sandy Bridge chips fitted in later models are needed to achieve 6 Gb/s.

On your question of hybrid drives vs Fusion drive, you need to understand that a Fusion Drive is not a single physical device, it's Apple' s novel way of linking a (fairly small SSD) and a HDD via software to appear as a single volume, which it does very well.

Whereas a hybrid drive has typically a 1TB HDD and a 60 GB SSD in the same case linked by firmware, on the whole I don't think these devices are as "smart" as Apple's Fusion Drive.

In response to your question with a 2009 machine, Fusion Drive is part of OS X it's certainly in Yosemite and El Capitan so if you run either of these and have the appropriate hardware, so you can have a Fusion Drive.

On the Blue Ray you could put on in the case but it's not worth the hassle and yes, you need additional software to run, but many suppliers of drives will bundle it in the price.

@Stuart Kidson - I was talking about adding the 3rd port not being worth it. Yes, upgrading the HD is still viable. I prefer going with a SSHD hybrid drive Vs going with a dual drive setup in these older systems with a SSD because the optical drives port is so slow in this series it makes little sense unless you swap the devices around which is a pain!