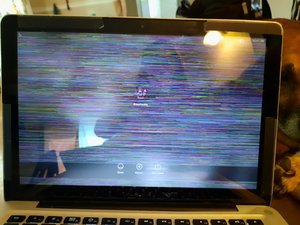 MacBook Pro Mid 2010 13" Unibody I'm trying to upgrade from 4GB RAM to 8GB RAM. I bought two 4GB sticks from iFixit, followed the iFixit install instructions, and upon restart, it appeared as if the swap had worked. Going into About tab I can see that the computer is recognizing the new sticks, but shortly after starting the computer, horizontal colored lines filled the screen, the computer froze, and then shut off. I tried turning the computer back on, but couldn't make it past the log-in screen before the lines showed up again. I took out the new RAM sticks and put back in the old 2GB sticks, and this fixed the issue.

Any ideas on how I can upgrade to 8GB successfully? Is there a step that I am missing?

I am in a pickle here; I need to upgrade to 8GB since one of my school's software programs is no longer working on my computer, since their last software update. I was told that Lockdown Browser now requires 4GB of available RAM in order to facially recognize the test taker. :(

I think I may have found the issue. Just doing a visual inspection, it looks like one of the new sticks has a broken pin. Part of one of the metal pins is missing. So maybe this is causing a bad connection? Any thoughts?

@bneatheskin - Did you try the original RAM to see if that solved it?

You likely put in the wrong RAM. This series uses the main RAM for video RAM.

This model has a "48 core" NVIDIA GeForce 320M that shares memory with the system.

Make sure you are using 1066 MHz PC3-8500 DDR3 SDRAM. You may want to put back your original RAM to make sure nothing else got damaged.