I was wondering if someone could give me some advice? I've never fixed anything electrical and would like to give it a shot.

My LG - 34UM95-P UltraWide monitor stopped working earlier this week. It won't power on, the white LED light near the joystick at the bottom of the screen is no longer turning on - neither is the monitor itself.

I've changed the fuse in the plug, but no joy.

I've had a look online and it's taken me down a bit of rabbit hole, I found one post that suggests the issue might be related to a EEPROM chip, perhaps it needs replacing or rebooting?

Wondering what tools would be useful to get to try and fix this monitor?

The monitor is in great condition for its age - purchased in 2014 - it's not been knocked about, I think something has just burned out (I have no idea).

It might be unrelated, but worth mentioning. I mainly used it with a MacBook Pro connected via Thunderbolt port. Never had any issues with this. In the last year or so a second PC laptop has occasionally been used with the monitor. Connecting via HDMI.

Sometimes the HDMI connection seemed a bit shaky, the monitor would make a white noise/static sound almost as if it was cutting out but only for a split second. Trying other HDMI ports on the monitor didn't seem to make a difference. Unplugging the HDMI lead and giving it a blow seemed to temporarily fix it. It was very random.

The monitor finally stopped working after the PC laptop performed a windows update.

The PC laptop wouldn't connect to the monitor and the image on the laptop was jumping all over the place. The monitor was blank, no power. Not sure if this is related?

Hope someone can offer some advice.

I've managed to open the back of the monitor. Images attached. 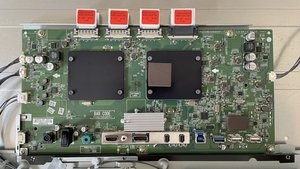 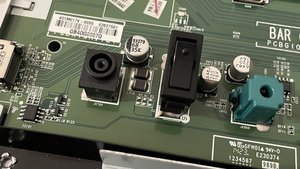 Test connector
I was unable to get the red probe deep enough into the connector, so I put it on the metal coming out of the connector, see red circle below. The black probe on a screw on the board, see black circle in the image below. 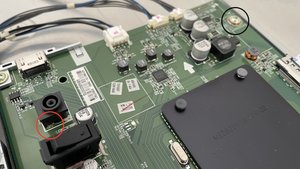 The multimeter was set to resistance mode, and it beeped. 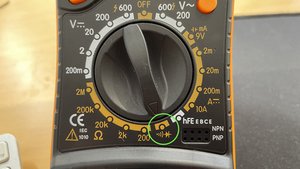 Set multimeter back to DC voltage mode, setting 20. Plugged power cable in and turned the power on. Black probe on the same screw as before, and red probe on L713 , gave me a solid reading of 19.20 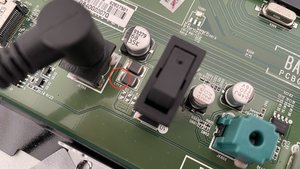 I have a similar issue, but it's the jack. I have to push the power supply plugged into the jack to the side to get it to work. Previously, the monitor would cut to black occasionally, and I wasn't sure what it was. Not I know. Issue is I see no places to find a replacement power jack. Just power supplies.

Is there anything else I can try?

@Jordan Thompson thanks for your comment, is the power jack not part of the power supply? Or do you mean the jack on the board? If so, It’s possible to replace this. See links in this post.

I am almost certain that the issue is your power connector on the monitor. Especially because the white buzzing noise that you mentioned in your question.

These wider monitors usually operate on a 19V power supply with currents up to 3.5-4.5A. The connector is similar to a laptop DC IN connector with 2 inputs (V+ and GND) and usually they are soldered on the motherboard by 3 or 4 legs.

The static noise you heard was probably a leg come loose in that connector due to physical and/or electrical stress (almost 85Watts) at this tiny connector it may be burnt and/or broken and that is why the monitor is not turning on.

If you are able to take the monitor's back cover off and measure the input voltage, which should be 19V on the connector, you should see either 0V or a non stable voltage if you move the cable in the connector. If this is the source of the fault, you can desolder old connector and get a new one soldered in. If there was a short created by the loose connection at the power input, you may have a blown fuse on the motherboard as well. 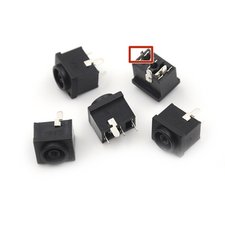 Here's a link to a video on how to open the monitor:

Thanks for the reply, that gives me something to try!

I think I'll be able to take the back off the monitor, thanks for sharing the video.

Can you recommend a device for measuring the input voltage? and what I'd need to remove the broken part and re-solder it?

Then a soldering iron if the problem is the connector. Try to get a 60Watts or higher just because of the thremal mass of the board you need to desolder the connector from.

Thinking of getting this set on Amazon. What do you think? It’s 60w

With this soldering iron

Where can I get replacement connectors from? Do you know the name of them?

Did a reverse image search. Looks like that part is called a DC jack SA300. Appears to be a standard part used in many monitors.

Looks good. Bargain for that price.

With lead free solder I would buy some sort of flux to help the flow of solder.

Connector is similar to this:

@stephenmeehan For now just start using the LG flowchart for the no power situation. If you show 19V on C764 you know your jack is okay and you can move past it. 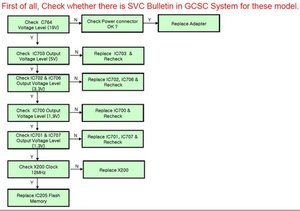 @stephenmeehan finally found the rest of it too. Check the IC's according to their required voltage. IC 703 is pin 7 all the other IC's are pin 8 to be checked for the proper voltage. Looks like this beast (monitor:-) had issues with it's EEPROM. Looks like a lot of people(weirdly enough mostly Eastern European) flashed the EEPROM. Anyhow, this LG 34UM94 95 should help you getting your monitor back on the road :-)

That’s really helpful, thanks for sharing that.

@stephenmeehan of course. Check the IC's as outlined. Let us know what you find