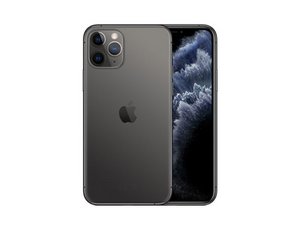 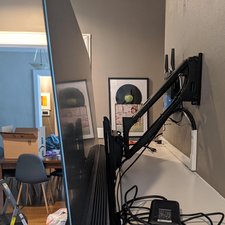 I have an iphone 11 pro whose earpiece got wet. This caused it to boot loop, and then when trying to restore using itunes, it caused error code 4013.

Note that while working on the phone, I never unhooked the battery cable, which I now realize I should have done.

However when I tried to turn the phone on after all this it showed no signs of life. Display was completely black and no response. A complete brick.

I tried several things after this, including hard resets, charging, unplugging the earpiece cable, removing the battery cable temporarily, plugging phone into a computer with itunes. But I get no response at all. Nothing on the screen, no vibrations, no heating up, and itunes does not recognize that any device is plugged in. I even completely unhooked all the screen cables and plugged it into itunes, but still no signs of life. This indicates to me that the problem is not on the screen or earpiece. The phone is now a complete brick.

I’m guessing that what happened is one of the following:

1) Since I left the battery cable plugged in while I was working on the phone, I shorted out something on the motherboard and fried it, so it won’t do anything.

2) When I put the screws on the cover plate back in, I screwed one in too far, and destroyed a motherboard trace.

Anyone have any ideas of what might have happened and what I can try to bring the phone back to life. Strange that there were no signs of life at all after having it completely functional temporarily. And the only cable I unplugged during this time was the earpiece cable, so I couldn’t have re-plugged any other cables incorrectly.

I am posting some pictures I took after taking the phone apart again to try and bring it back to life. Just in case anyone can spot something obviously wrong.

This is just the motherboard area with the plate removed: 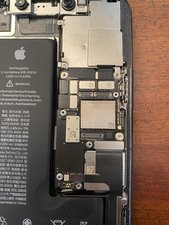 This is the entire base of the phone with the screen removed and battery cable unplugged: 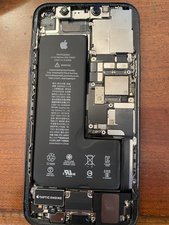 This is the entire phone after reassembly with the cover plate attached too: 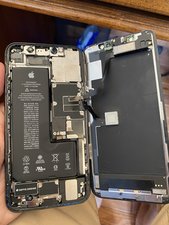 Well from what I can tell it doesn’t look like it got terribly wet but whenever you work on electronics, always disconnect the battery. Unless it’s like a Microsoft Surface. Those you’re better off leaving the battery connected. At this point I would send it to a microsoldering specialist. I personally send them to Jesse Cruz at VCC Board Repairs as he’s the guy I trust to handle customer devices and he’s very knowledgeable. Just be aware that he typically only performs data recovery on liquid damaged devices but get in touch with him to see what he can do.

Thanks for the reply. I did contact Jesse Cruz and pointed him to the info in this post. He said that it’s possible that something got shorted, and cost to repair a short is $225 including return shipping. That’s more than I wanted to spend on this phone.

I’m still hoping it’s something I can fix myself. But if it’s a short, I guess that’s something I can’t fix. Maybe if I don’t have any other good ideas, I’ll take the motherboard off and have a look just for the heck of it.

Have you tried removing the flex again, then doing a dfu restore?

Thanks for the suggestion. I have removed the cable for the earpiece. But when I connect it to itunes, absolutely no signs of life, and it is not recognized. So I can't do a dfu restore.

4013 can also indicate an issue with the NAND.

Sounds like you need to sent this off to someone who has experience in board diagnosis/repair.