Hello, my MacBook Air bought in 2017 has been weird for the past 6-7 months. It suddenly gets REALLY slow to the point that every little action becomes an exercise of patience while I search for inner peace trying not to throw the computer away.

It stays this way for some time and then it suddenly gets back to normal, sometimes even if I don't do anything, sometimes through a combination of things that I *think* that help (e.g. running First Aid in disk utility seems to help sometimes, the moment it concludes the analysis it becomes normal again). I have already reinstalled MacOS many many times, done SMC reset, etc etc etc

The issue has gotten worse this past week so I decided to finally look closer. I have the impression that it is probably connected to the battery - I replaced the battery in the beginning of this year in an authorized reseller but it seems it can be the root of the problem. When I run Apple Diagnostic the message PPT004 Battery needs service appears - although no other message appears when using the battery.

This week my dog stepped on the power cord while the Mac was going through its slow phase and suddenly it became normal! I then noticed that there seems to be a pattern of the issue getting solved whenever I changed the source of power - e.g. if it's plugged and suddenly goes slow, I change to battery and it resolves in a few seconds. The same thing happens if it is on battery and suddenly goes slow, I plug it and voilà, solved. I tried this 4 times this week and worked, but honestly I am not sure if that was the case during the past months.

Here are some screenshots from Intel Power Gadget and Temp Monitor showing some crazy stuff going on right when it becomes really slow - as the Frequency graph shows the sharp drop at the same time that the power change. When I took this screenshot the Mac was using the battery. Some other crazy stuff happen with the sensors, but I honestly dunno how to interpret that.

Happy to hear any inputs as this has been puzzling me for months now. Thank you! 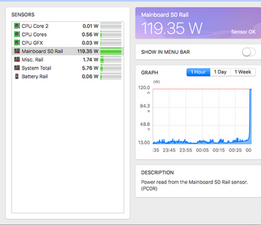 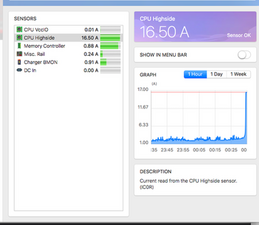