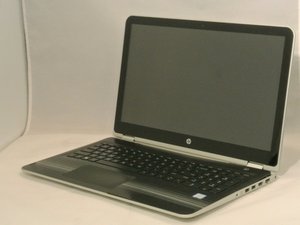 after replacing battery Laptop won't restart when I laptop on battery

I replaced battery in HP Pavilion 15-bk020wm with correct battery bought through Ifixit. Turned on laptop on battery only and it worked fine, but when I shut down the laptop, then tried to turn it back on it would not power up while on battery. Disconnected battery from laptop then reconnected it. Laptop started up but same thing happened when I shut down the laptop and the tried to start it again while only on battery. Laptop does start up when plugged in. Do not know why this is happening. Need help. Also did check battery through power shell and HP assistant when had it on with battery on and both stated battery status was 100%.

As an adendum I turned on laptop while plugged in and then disconnected the plug. The laptop stayed on (apparently powered by the barttery), but when I shut the laptop down and then tried to start the laptop while on battery again it would not turn on.