Battery not charging on MacBook Air after water damage and repair.

I spilled water on my MacBook Air 13 inch (early 2015 model). I immediately shut it down and found it would not power on again.

I disassembled it and put it back together. It now turns on, but only while it’s plugged in. Whenever the charger gets unplugged, the computer shuts down. Sometimes it randomly shuts down even while the charger is plugged in. My computer gives me this message: 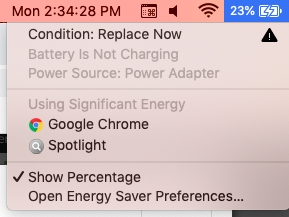 Here are the battery specs from system information: 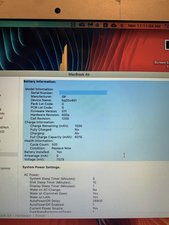 I’ve tried using another battery that’s been tested and works fine. I had the same issue, which proves that the problem is not a battery issue.

So what could the issue be? I’m thinking it’s something to do with the PCU or an electrical circuit issue. Could it also be that maybe I didn’t reinstall the I/O board correctly? Or that there’s damage on the I/O board/charging component? I’m not really sure how to fix this or repair it though. Any suggestions? All repair shops near me are closed due to the corona virus.

Thanks again!! I really appreciate the help.

What did you do to repair said liquid damage? I would shut down the machine and unplug immediately to avoid causing further damage and have it looked at by a professional.

I completely disassembled the laptop and dried off all the water (there wasn’t really that much, only a few drops here and there). Then, I sprayed all the components with an electronic contact spray, let it dry, and reassembled them. There is absolutely no water left in the laptop, the only damage right now is corrosion somewhere which I’m guessing is preventing the power from reaching the battery

What spray did you use? It's best to use 99% iospropyl alcohol and a toothbrush to clean corrosion. I would send it off to Rossman Repair Group in NYC as they specialize in MacBook board repair. You can check out Louis Rossman on youtube to get an idea of what he does.