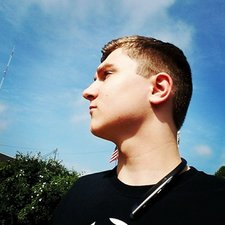 iPhone 6 Randomly Restarts while in iOS

So i got an iPhone 6 from my brother that i was going to restore and use (im currently rocking the 5C and i had some of the parts laying around for one anyways). I knew it had VERY little water damage but it still powered on and worked while he used it until he dropped it and obliterated the screen. Before i bought the parts i saw it would randomly restart so i bought a battery along with the screen thinking it was a battery problem. As of now it has a new body, screen, charging port, and battery and it still restarts. Ive updated it and factory reset it and it still restarts. Now to explain my title, while it’s on and running iOS it will restart but if its Updating, Restoring, in Recovery mode or DFU Mode it’s normal and doesn’t restart. Everything is pointing towards it being a software issue but not at the same time. I’ve never seen an issue quite like this before. What kind of hardware issue would make it restart only when iOS is running?

Note: i posted this question on Apple Community and they said i should just take it to a Genius Bar and have them look at it but i feel like theres something im missing that i can do myself.

The genius bar will do nothing. They will want you to buy another phone. I would first buy another battery just to make sure the battery is fine. When you say it had very little water damage could you explain this? Even small amounts of water can damage the right component to cause overheating or low voltage that would cause your phone to reboot. One last thing, when you took the board out to place it in the new housing, did you notice any corrosion on the board?

It was dropped in bowl of water for a second before the screen was shattered. It disbanded it with the old and new screen/battery. And I didnt notice any corrosion but I can double check