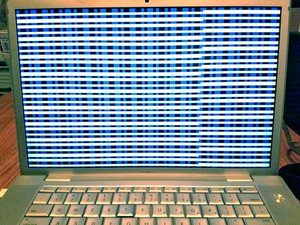 I had a response from Dan to my initial Question….

Dan says: “Sadly your GPU is gone. Look at it this way three years ago we saw most of these systems die as they had a defect in the GPU Apple Admits Nvidia GPU Defect In Some MacBook Pros. While it might be possible to cook your logic board to give your system a bit more life (mostly to recover your files) it will be short lived ;-{

Time for a new system - Sorry”

I purchased the MacBook Pro directly from Apple as a refurbished unit.

The Graphics card that came with my unit is supposedly the NVidia GeForce 8600m GT.  It was found to be defective and there was a lawsuit.  MacBook Pro owners eligible for free repair in NVidia lawsuit settlement.  “MacBook Pro owners who bought a laptop with an NVidia graphics processor in 2007 and 2008 may be eligible for free repairs as part of a settlement agreement for a class-action lawsuit.”

I like my laptop and I use it both for Mac and Windows with the Intel Processor.  I think the free repair offer expired the end of 2012, but I will try and find out if the offer still applies.

Is there an on-board video card in the laptop that can somehow be switched on to become the primary video to neutralize the NVidia card and its problems?

If I chose to purchase a new video card and or logic board for my laptop, which (current) model(s) would work with my unit and what would be the estimated cost for the part(s) and an estimated repair price/time?

Which would be less expensive – Repair or Replace?

Is there a way to transition/remove all the data on the hard drive (both Mac and Windows) in its present state?  If so, how would I do it?

Should I let a professional handle the data removal from the hard drive as well as any possible repair(s)?  Is it worth contacting an Apple Store and talking to the “Geniuses” or contact Apple Technical Support?

Lastly, any other recommendations for a specialist/repair person to contact to discuss?  I live in Los Angeles on the west side of the San Fernando Valley.

I can answer five of your questions.

@hyqo Thanks for the recommendation. Yes I can do it. Would just need to know what type of device the data needs to be transfer to. If a new Mac, then a USB C drive, that could be used as a Time Machine backup drive in the future.

@mayer No problem. I see you have a five star rating on Google so I thought why not. I also noticed on your profile you had a mail-in program (Aaron mentioned that earlier this week too) and I thought that would work perfectly for you.