This iMac don't turn on, no fans, no HD, but the first diagnostic LED in the logic board is on, so I suspect can be the PSU or the logic board the culprint, but I want to be sure, because if I change the PSU and the faulty one is the logic board or viceversa, the fix will cost more than the actual value of a working iMac of same model beause I have to change some parts like LCD cables.

I fixed on the cheap before some faulty iMac PSUs changing the capacitors, but no swollen tops on this one, so **MAYBE** is the logic board the defective one.

I followed this guides, with no success

How to Troubleshoot Logic Board

As far I done the folowing:

I got some weird values, so I want to know if someone know the correct voltages for the PSU and logic board power pins. I have this values on a spreadshet, hope someone can help me to figure out whats wrong with these values. 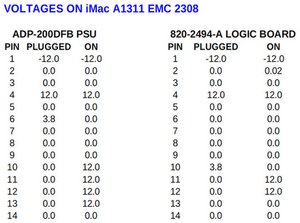 @oldturkey03 thanks for your answer, I already had measured ther logic board test points, and that is what had me confused, if you look at the values I obtained, no all where what you read on the manuals, but now that I saw again the image you uploaded, realized that I was measuring the pins in the wrong order. Measuring again in the right pins, the voltages are more coherent, I can be sure about the logic board is faulty 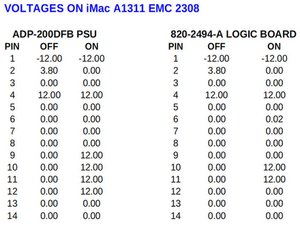 @satoslp I’d start of by measuring on the logic board test points. 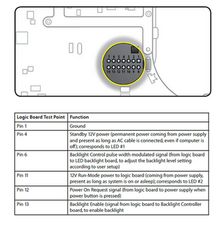 Pin 4 will have to have 12 Volt if your power supply is good. If it does not then you most likely have a bad PSU

Locate diagnostic LEDs in bottom case vents. Plug AC cord into system. Verify if diagnostic LED #1 turns ON. You may alternately check for presence of a 12V DC signal between pin 4 and pin 1 of logic board.

@satoslp looks like your PSU is supplying the right voltage. Yes, looks more like a logic board issue. "I saw again the image you uploaded, realized that I was measuring the pins in the wrong order." that is why I like to see and post images. that way we can all be assured we look at the same issue. Best of luck to you and let us know how it worked out.

@oldturkey03 I'm gonna buy the logic board, thanks for the answer to my question, now I,m considenring to change the C2D logic board for a i3 board, will be possible?

I purchased the i3 logic board and it worked in the formerly 2009 iMac C2D, so the big risk in buying a "new" logic board worth it, even payed the beat on buying it for a more recent i3 that can be upgraded to i5 later

Hi, By any chance I can get the above write up on each pin a little bigger, I am unable to read. I have a iMac A1418 totally dead, ONLY first led is switching on, when I depress the power switch, this first LED also blinks, so guessing the power switch is doing its JOB. I can measure one 12V on power supply output pin, NO other voltage. I am stuck between debuging the PS or suspecting logic board, where some feedback the PS is waiting for to switch on the remaining power lines. Want to know what are the various voltages I must see EVEN IF logic board is BAD. Want to decide if its PS or else where.

Sorry, I clicked on the diagram and it opened up nice and large. So now I am stuck with LED 1 on, 12 V coming, does this mean PS is fine and I should ONLY focus on logic board ? Some place I read, it said change the battery, is that logical ?

My same model imac encounterred same issue, I am considering to upgrade my spoiled current logic board to a new i3 logic board as you mentioned.

Could you help to answer my below questions?

What is the model number for your purchased i3 logic board?

Is the i3 logic board previously for imac EMC2389? Must have both i3 CPU and graphic CPU attached?

How about the current overall situation for your imac?

Sorry for the delay in answer your question. In the beginning I had plenty of questions, and no one helped me with this "Frankenmac", but I managed to figure out all the things I have to change to achieve the transformation.

As far as I can tell, you can change the logic board with one for i7, but must change the PSU, and it defeats the porpuse, because some PSU can cost as much as one logic board. You must get a logic board, the CPU and the videocard, of course you can purchase them attached to each other or individualy, but you can't use the C2D and need all 3 of them, with several cables listed in the post I mentioned above.

I changed my logic board with same model, it works.

But your response is so inspired, I definitely will try to upgrade in the future.

You are imac expert.

Thanks for your support Crawford, I'm not by any means an expert, only someone that when set a goal try hard to reach it. Definitely it's not a practical fix, as long as get all the parts needed is time consuming and sometimes expensive, but having patience and using a lot of google search is something you can make. Apple isn't going to stop me doing something I wonder "what if..." I like the A1311 because is the last one iMac with optical drive, is a great computer for daily tasks and light use in design suits (sketchup, Fussion 360, Autocad, and Gimp), totally worth it the upgrade, but this task is not for everyone, you have to be stubborn and to like the challenge.

My motto. Indeed you inspire me and a lot of people who just need to read this in order to push ourselves a bit more. Good!!