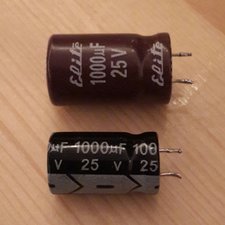 I failed to self repair my PC monitor. Help?

One of my monitors, a AOC 2330Fz, recently stopped showing anything on screen, although it would power on and my PC would recognize it as a working display. After some research, and some examination, I learned that the backlight had stopped working , but the LCD was still functional.

Reading further into it, the probable cause was a bad capacitor(s) on the power supply board, so I opened up the monitor and found one visibly damaged capacitor. I ordered some 1000uf 25v Electrolitic capacitors that I thought would be suitable replacements for the bad 1000uf 25v Electrolitic capactitor that I found on the board. These are the ones I ordered. When I received these capacitors, I noticed that they are a little smaller than the bad capacitor, but I went ahead and replaced it anyway.

Now, my monitor seems to have a working backlight, but an entirely new problem. When I plug in the power to the monitor, it tries to power up. It lights up for less than a second and then there is a very faint click sound that comes from the power supply board and the monitor shuts off, briefly, then tries to power on again and continues to cycle this way.

Did I do something wrong in my repair? What might be causing this new problem? 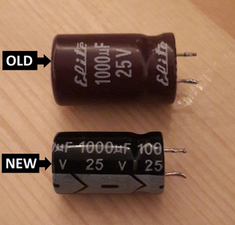 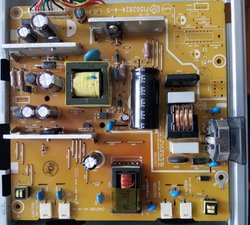 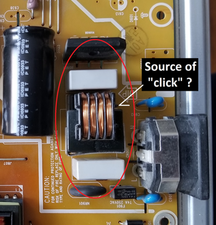 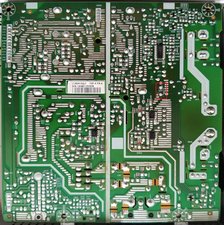 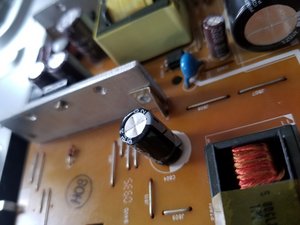 Is the old capacitor an electrolytic type? I can't see any markings on it in the picture

If it is then perhaps this is a stupid question, but did you connect the new capacitor the right way? They are polarity conscious. You may notice the -ve marking on the side of the case of the new cap. There should hopefully be an indication on the pcb showing how to connect it.

Apologies if you know this.

If it is connected OK can only suggest that you check your work, for possible solder bridges and that you haven't disturbed any thing else during the course of the repair.

Thanks for your response, jayeff. I'm absolutely not sure of anything, now, because it's my first time doing something like this and it's failed. The opposite side of the old capacitor has these markings:

The board has polarity markings and I matched that up with the capacitor, the negative being the striped side with the negative marking and the shorter leg.

I continue checking to see if I can find any mistakes I've made, but this being my first time, I might not recognize a problem if I see it. Could I have damaged the internal circuitry with heat when I applied my soldering tool to remove the original capacitor?

Hi,old turkey is right,grab the specs and tester,and some beef jurkey and have fun.the web site i gave you is realy good at having sheets on a lot of components.

@chris__ I agree with shawn on this. It is not your capacitor that is at fault. Your capacitor is the right one and your soldering is proper and so is the polarity. the clicking is normal as well since it does try to turn your monitor on. Your capacitor blew because of something not working right.

I usually do not replace just one capacitor but recap the complete PSU as well as replace the power IC's Q805 and Q806 on your board. . You can check the PWM controller LD7576 IC901 on your board. To check those components download the datasheet for those. Since you are new to this type of repair it may take you awhile but it is ultimately a good learning opportunity. Just in case you fail, replacement boards are relatively inexpensive and readily available.Microsoft Word - LD7576-DS-03.docAO4620_Rev8_RoHSx

Thanks, oldturkey03, for your input and for the resources. I think that the repairs that you and shawn have suggested are beyond my capabilities. Replacing the board might be my best option. Can you recommend someplace where I can buy a replacement?

The "number" used is the board number which is printed on your power board.

@chris__ as @jayeff mentioned that particular board is used in a few different monitors like Acer, Viewsonic etc. If you do a search by the board number you'll find plenty of places that sell it for a decent price.

Thanks, you guys. Going to mark this post as answered. :)

IT sounds like you did good but the cap is the simtem not the cause.there is a voltage regulator that is bad.unfortunatly i do not know wich one on that unit.find the schematic to solve issue.There are a lot of heat sensative components and electrolytics are one of many so be careful.bad caps are usualy puffy on top.you need to run tests to find the bad ic chip.you can get component specs from alldatasheets.com

Thanks for your input, shawn. I'm out of my element and not equipped to do much testing beyond visual inspection. I do have a multimeter, but even if that could be handy in solving this problem, I wouldn't know where to begin. I'm going to attach more photos and if you spot something that I give attention to, please point it out.

Hi, the only thing that I would suggest is to try to get the EXACT capcitors that were factory fitted on the board and see if it help (most likely that it won't). I'm confused by the clicking noise from the power supply though, the only clicking that I would've thought it might've been would be a relay but I don't think they're present in a power supply, that's weird. But hope you find a solution soon!

Also, double check you haven't accidentally put solder on other tracks on the board! Good luck.

Thanks, Brandon Frost. I'd be glad to find some sign of a mistake that I made, at least then I'd have an idea of what to do next. I continue to inspect the board.

It's a very soft clicking sound that seems to be coming from somewhere close to the power socket. I tried my best to listen closely and to determine its exact source, but its difficult. I suspect that it's coming from a component that's listed in the service manual as "LINE FILTER 27MH" but it could be something else in that area of the board. I've attached some more photos to the post. Please have a look and let me know if this gives you any idea.

EDIT: The "click" actually is closer to a component called "XFMR POWER 490UH TPV-PT" which I think is a power transformer.