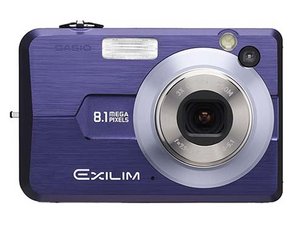 Casio Exilim EX-Z850 is an 8.1 megapixel camera with 3x optical zoom. It can also record videos and has numerous "best shot" modes.

Camera works fine on closeups, photos of anything past 10’ come out white.

Hard to tell what the problem is from your description. Does the LCD also go white when focused beyond 10'? Do you actually mean white, or over-exposed - I mean can you still see anything of the image? Is it still white if you take it into a very dim light? Is it the same for all picture modes, including manual exposure?

There's a good series of disassembly guides (Casio Exilim EX-Z850 Motherboard Replacement) - you could just take it apart and look for any loose connections etc.

I have had several Casio EX-S600 cameras (eight to be exact, they can be had relatively cheap on ebay) that all eventually suffered from an issue similar to what you describe, rendering the camera unusable. From the research I've done and the camera operation I have witnessed myself, I can say with almost 100% certainty the shutter is sticking. You describe distance photos as being washed out (white) and close up photos as OK. If your shutter is sticking, distance shots allow much more light into the aperture than the close up shots, hence the overexposed/washed out/"white" photos. However, as the shutter operation gets worse, and it will, even the close up shots will come out overexposed because the shutter will eventually hang wide open all the time. Since parts are mostly readily available on ebay, I attempted to make a repair myself (after I called a camera shop and found out the repair would cost many times more than the camera was actually worth). I have repaired several small electronics myself; iPhone batteries, iPod screen, but this camera... YIKES! Very densely packed internal components, to say the least. I'm still waiting for a step-by-step for an aperture/shutter replacement. Unfortunately, who uses actual cameras anymore, right? And then there's the throw away nature for these types of electronics that hinders the DIY segment... sigh...

I also wanted to ask, do any of the photos you have recently taken with this camera since the issue developed look weirdly pixelated, or have strange lines running through them when you view the shot on the display?

Err, I think you mean the iris. Old fashioned film cameras had a shutter, which completely shut the light out, protecting the film, except for a fraction of a second when you took a photo. In digital cameras there is no shutter otherwise they wouldn't be able to show what the camera was seeing on the screen before you take a photo. However, all (except maybe the cheapest) compact cameras and SLRs, both film and digital, have an iris like the iris of the human eye, which opens or closes progressively to allow more or less light in, according to the brightness of the scene. This also affects the depth of focus.

The iris consists of several metal blades which can be angled so as to open or close the aperture in the middle. If these are bent, dirty or corroded they won't slide over each other properly. If they're bent or corroded there's pretty much no hope but in principle one might be able to clean them, though disassembly and reassembly would probably be very difficult. But any kind of lubrication would certainly make them worse.

If you've got several dead ones, why not completely disassemble one and find out exactly what the problem is? Lenses can be very difficult to reassemble, but if it's dead anyway you've got nothing to loose.

" In the human eye, the pupil is the aperture." - Wikipedia

Didn't really come here to split hairs or get in a peeing contest. Just trying to help someone who's camera exhibited symptoms I have experienced myself. I have never heard the term "iris" used in conjunction with a digital camera. Please, take the floor and enlighten us all with your vast amounts of technical wisdom...