I've read many postings in many threads about MacBook Airport/Bluetooth-Card ("No wifi-hardware installed") issues...

Also some suggestions about fixing this problems at component level.

But most of them end up in successful SMC or PRAM-Reset. Some are working at component level on the LogicBoard, but 99% of the problems are solved in changing the inductor L3404 or some in changing L3401.

But back to my special problem:

A friend gave me two of these older MacBooks. One is functioning good, the second one doesn't have WiFi (while Bluetooth is okay).

At first I resetted PRAM and SMC but nothing changed.

The system goes on to say, there isn't WiFi-hardware attached... 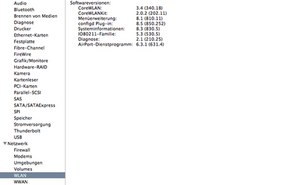 The next step was to change the combo-cards between the both MacBooks.

The good system was able to see other's combo-card without problems, the bad system still doesn't "see" the airport-section of the combo-card (bluetooth was going on to functioning correctly – on the first and the second card).

So it was evident, that something isn't okay with the mainboard.

I found many dialogs to this problem – so the thread in the the macrumor-forum too:

Now I took a few measurements on my two LogicBoards (LBs) and found out, that the described inductors "L3401" and "L3404" are good. But I wondered that the voltages around the MOSFET "Q3450" were different on both LBs. I hope you could help me. I'd be very, very grateful to you, if you'd do so?

Here is the relevant part of the schematics with my voltage-values:

What do you think about that?

Is it a defective MOSFET?

Sorry for my poor english...

I am looking forward and hope to hear from anyone who works at component level on this issue.

now I have solved the problem successfully.

It was actually the MOSFET Q3450 that I suspected.

Have it exchanged for a same from a dead motherboard and see: "Wifi onboard" works again.

Only if someone looks over ...

Before we go deep into the circuitry lets check one more part and thats the AirPort flex cable. I've encountered a few which needed a new cable as it was damaged.

For reference here's the part: Airport/Bluetooth Flex Cable for the Macbook - Apple P/N 922-9259

Thank you for the reply. I had changed the Airport combo-card 'with the flex-cable on it (the WiFi combo-card and lower speaker with it).

Therefore I'm sure, that the flex-cables and the both combo-cards are okay!

In the meantime I changed both modules vice versa two times. The result: both cards are functioning correctly with the good logic board and both have the same problem on the defective logic board.

If you have more suggestions for me, I'd be happy...

All the best, Georg