Can I fix an incorrect temp. sensor/disable it?

My mac hit a massive issue randomly where it didn't boot, a problem with the HDD...

OK got it fixed, HDD failed, restored my files, got everything working again, but hey... wait my screen went black. its still on and working, I still hear it react to things i do

It just turns the screen off, and wont turn back on. so I restart it and the screen turns off again, this time not running but booting, then again while in the boot screen while I was about to check recovery. I let it sit and cool for a while but it was odd because it wasnt even too warm, hottest part of my system has always been the GPU and it usually hit 150°F at tops.

I go into recovery after letting it cool and it shuts off again after 10 minutes. I let it cool again, for it to start once again, I run it normally, so I can check my system fan controller to check how hot its getting...

The mac is cold to the touch, all my things are marked cold, but the GPU? nope. the GPU diode is marked to be at 200°F when its cold, and it just goes up until it hits 270 then shuts off my screen and I have to let it cool, to stop this I have fans running max and even a desk fan blowing on it, still turns off when i stress the GPU, I have reason to believe that its the sensor because its consistent to appearing way too hot and the GPU showing no signs of issues other than that.

How can I correct this or just disable the sensor? (preferably without opening the system and pulling the sensor plug) 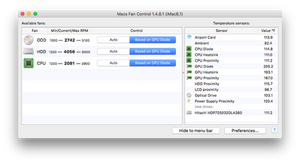 restarted my mac a few minutes ago, resetting the SMC

now the other GPU stuff are also marked way too hot, again, i would normally feel this on my case but its cold.

edit: i told them to turn up based on the GPU sensor's activity, to keep it stable, only stable settings i found that didnt make the fans run at max, which it does most of the time anyways.

~~standard mac fan settings AKA closing the program just turns the CPU fan up halfway until the screen goes black and then the fan just turns back down. my personal settings worked so long and never let my hardware get too hot but doesn't work anymore as of a few days ago

SOLVED: i have come to the conclusion that my mac is getting old, and that this is some hardware problems springing up at once. i will be getting a new mac, its probably due because my mac is 9 years of age.

To be clear here you replaced your HD with a new drive is that correct? If you did what is the make and model of your drive?

Did you follow this IFIXIT guide: iMac Intel 20" EMC 2266 Hard Drive Replacement. Review Step12 through Step20. Did you forget to move the thermalsenaor over to the new drive?

Sorry to say you'll need to open the system to fix the issue even if you did get the cable moved over there are a few points in the process they you could have messed up and/or damaged things.

You could also run diagnostics on the system to see what it shows and/or run a good temp app like this one: TG Pro

Let us know what you find

But I don't think either will alter things.

As this point you'll need to get inside to first clean the system as I'm sure its never been cleaned of the years of dusk build up and you'll need to likely refresh the thermal past on the CPU chip which is a major repair.

i never opened it to change the HDD itself, i just used the recovery to "repair" it.

im currently running "Macs Fan Control" which hasn't given me any issues in the time i used it (pretty much the whole time i had this mac) and is actually what im using to keep the fans up so it runs.

im usually into software fixes but i have done a couple of software works in my time, hoping i have the right tools to open this up, i will check around.

Dust! You need to clean out iMacs once every few years or they will overheat and shut down.

The issue persisted after a good cleaning, so I assumed it was hardware based, I salvaged it's hard drive, and eventually scrapped it due to it sitting around for several years doing nothing, I have moved on to another computer.