Some time back I tried installing Linux ubuntu alongside Mac OS-X on it (which obviously wasn't a good idea.

After not really ending up using it and having a few issues I just deleted the Linux partition in disk utility. This lead to the system being slightly unstable when booting, after updating to MacOS Sierra my Mac ended up having loads of boot loops which could only be fixed by clicking reinstall in the recovery mode. I was sure the problem had something to do with grub so I ended up doing a clean install with a TimeMachine backup. This didn't work the first time around since I let my Mac take everything from my TimeMachine backup including programs. However when doing the second clean install where I opted to not let my MacBook copy programs that fixed the boot loop problem.

But now after doing all these reinstalls MacOS doesn't recognise the serial number on my MacBook leading to stuff like iMessage not working at all.

So does anyone know how I could possibly get my serial number back? 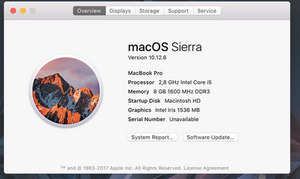 Setup an external bootable disk under MacOS using the OS installer (USB or Thunderbolt), then boot up under it (hold the option key to get to the boot manager) does it still not show up?

you mean the serial number? when i tested it there was no way of checking about this mac in the recovery tool

No not under the recovery option, that won't show it. You need to boot up the under an external bootable MacOS drive.

As I stated use the OS Installer app to create a fresh OS install onto an external drive.

so you mean like have a full operating system running on a flash drive? i did boot from a flash drive with the installer if that is what you meant?

You need a clean drive with a clean full install of MacOS (not the installer OS which is a minimized OS).

What OS are you using to install with , if i may ask? If you're using SIERRA you'll definitely be running into some issues. It's easier to boot up to disk utility and starting with Yosemite in this case because from the looks of it there seems to be some underlying software issues that is not getting addressed. I'd format and start from scratch. Reason being for the simple fact that if you installed linux via boot camp and just deleted the partition via disk utility without changing the boot permissions before you did, this could explain the issues your having. Yes i know this is a long way of doing it but if the boots sector for your unit is corrupted there is not much other choice.

I did use sierra to check but i have done a complete clean install where i formatet the whole hard drive with all the partitions on it so anything left from linux should be gone. I can't really do a completely clean install with yosemite as I use my computer every day for school though so I guess i could just wait for high sierra to come out and hope that apple have fixed these issues by then. luckily it's just iMessage and FaceTime that doesn't work so i'll manage

OH ok well that is understandable then. One thing I do recommend tho from past experience is MAKE A BACKUP ASAP just to be on the safe side lol time machine is good for this, but I'd also make a copy of the home folder just so that if the Time machine backup is somehow corrupted, at least that way you won't loose everything.

But just a suggestion

will do, thanks for the help