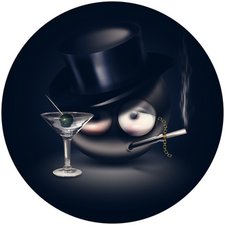 Backlite is gone, not display issue

Some time ago I replaced a screen on 3GS. That unit was bad as I discovered later, any pressure applied to top right corner of the screen was shorting backlite led + and - than backlite turns off. After lock/unlock it restored, but only untill I touched that corner again. So once again it didn't do back. I replaced the screen, no luck. Than I went with this scheme 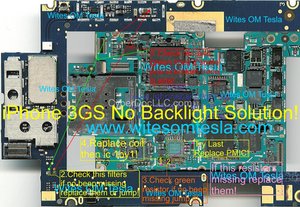 Guys, please, help my find out what's wrong there and how to fix it?

Since you know which pins to short, you probably have the schematics, so here are the basics: the backlight circuit in 3GS consists of a power inductor, a transistor driven by the power controller chip, and a small filter inductor. The first two form a DC-DC converter which rises battery voltage to a level sufficient to power backlight (don't have an oscilloscope right now to tell you the exact value), shorting the coil is not a really good idea, the converter simply won't work.

The coil usually dies first, but if you're adamant it's OK, you can also try replacing the transistor (on the right to the coil on your pic, marked with yellow "2"), it's FDFMA3N109 by Fairchild Semiconductor, a diode and an N-FET in a single case. They're still in production, you should be lucky. Please be advised: it has 2 additional pads on its "belly", so soldering's gonna be fun if you never tried that before.

Nobody had the same issue? No servicemen here?