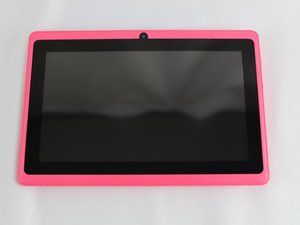 An Android OS tablet that is capable of taking photos and videos, navigating the web, and downloading applications for users to enjoy while using the tablet. Model Number : T7X

Why does my son's tablet not work at all?

My son won a Tagital T7X Quad Core tablet for highest sales in school during a fund raiser. After having it for about 30 days, it stopped working.

When we try to update anything, it takes us to the Google Play Store and immediately asks if we want to add a Google account. We already have one and when I enter that information, it shows a pop up that says "there was a problem communicating with Google servers. Try again later". No matter how many times I try, I always get the same response.

I've taken it to my local Sprint in the hopes they could help me. They said there is nothing they can do and said to contact the tablet company.

What can I do? My son worked really hard to get this and I only let him play a couple hours a week.

mine only says that launcher and google has stopped and thats it i cant get into any thing.

i suggest you buy him another one or you can do it this way: you try an app see if it works if the app works than i think that you should try and delete that app you were talking about and then see what happens if not let me know Good Luck!!! ;/

Do a factory reset, usually in settings, scroll down and find reset.