I followed a guide to replace some hinges as you can read here: Broken Hinge with unibody MacBook air

Unfortunately, after the replacement I had some new problems:

- the battery isn't working. It's recognized by the mac (see the picture) but it isn't charging nor the LED on the charger is on. 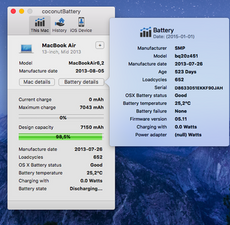 - the fan is always on at the maximum speed.

- the mac is very slow in every operation.

I tried to restart the SMC and the PRAM, but nothing has changed.

What I did? :D I broke the battery? It could be the I/O board? (it seems to bless hard to plug in the socket then before).

UPDATE: also the usb port on the i/o board side doesn't work